Blood of Elves by Andrzej Sapkowski

The Northern Kingdoms are flush from their great victory at Sodden Hill, when they defeated the Empire of Nilfgaard after it had conquered the nation of Cintra. The allied rulers now scheme to liberate Cintra, and to this end attention has fallen on the missing princess of that nation, Ciri. Agents scour the land for Ciri, for purposes noble and nefarious, unaware that she is in safekeeping in the great witcher stronghold of Kaer Morhen, where Geralt the White Wolf attends to her training. The arrival of an old friend, Triss Merigold, spurs Geralt into taking Ciri to another place of safety, but brings him face to face with those searching for her. 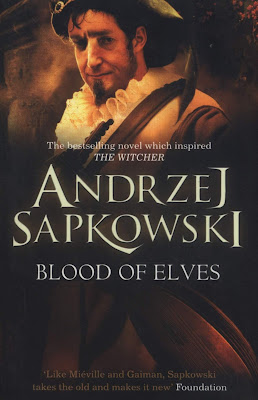 Blood of Elves is the third book in the Witcher series (following on from The Last Wish and Sword of Destiny) but also the first full-length novel, the first of five which collectively tell the story of Geralt, Ciri, Yennefer and the destiny of the Northern Kingdoms.

For those used to Sapkowski's tight and economical writing in the two story collections, Blood of Elves is something of a surprise. The novel sprawls almost indulgently, with much of the book being taken up by conversations, a lot of which consist of rather unsubtle exposition about the state of the world and politics. This stuff is interesting but overdone. The storyline itself should have a lot more tension, as Geralt takes Ciri from one potential refuge to another, staying ahead of pursuit, but the lengthy infodumping tends to dissipate the effect.

The book does come alive in its latter part, as Geralt does some traditional Witcher stuff (fighting off a sea monster, getting embroiled in intrigue with Dandilion and some sorcerers, fighting off assassins on the streets of Oxenfurt), and it's fun to meet a bunch of important new characters, such as Triss, Vesemir, Dijkstra,  and Lambert. Players of the Witcher video games will particularly find a lot of things to enjoy here, as The Witcher 3 in particular has a lot of callbacks and nods towards this book.

The book's key weakness is that not a huge amount happens: it's mostly set-up. Well-written, enjoyable set-up, but nevertheless an extended prologue for a much longer narrative. It does feel like it might have been better to combine this book with the following one, Time of Contempt, to create a more complete narrative. As it stands, Blood of Elves whets the appetite but cannot satisfy it on its own.

Blood of Elves (***½) is a solid instalment of the Witcher series, but is not as tight and varied as the two story collections. It does leave the reader keen to read on, but it feels a bit too slight in itself. It is available now in the UK and USA.
Posted by Adam Whitehead at 20:10

Email ThisBlogThis!Share to TwitterShare to FacebookShare to Pinterest
Labels: andrzej sapkowski, blood of elves, the witcher