AD 899. King Alfred's health is failing and his grand vision to unify the seven kingdoms of England under Christian rule has not yet been fulfilled. His son Edward stands to inherit the throne of Wessex but he is callow and untested, and the troublesome Prince Athelwold is again pressing his claim to the throne. To secure his dynasty, Alfred asks his greatest warrior, Uhtred, to pledge his sword to Edward for life. Uhtred refuses, yearning to set out on his long-planned quest to retake his ancestral home of Bebbanburg. Their quarrel turns violet and Uhtred finds himself banished from the Anglo-Saxon kingdoms...just as the Danes prepare their boldest plan of attack yet, and seek his support. 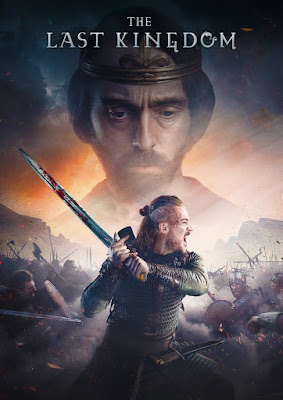 The Last Kingdom is one of the most enjoyable programmes on air, a (mostly) historical romp through the life and times of Alfred the Great and his heirs, who seek to unify England as one kingdom whilst facing constant pressure from the heathen Danes. Bernard Cornwell's novels are great fun and the TV adaptation is mostly faithful, although occasionally compressing events or characters for clarity.

The third season loosely adapts the fifth and sixth books in the series, The Burning Land and Death of Kings, and follows an over-arcing plot where the various tensions between Alfred and Uhtred that have built up over the series explode, bringing them to blows and seeing Uhtred banished from his new home. Uhtred is ensnared in the machinations of the alleged sorceress, Skade, and is convinced to join an alliance of Danes against Alfred, to the disquiet of some of his men who are still loyal to Wessex. The result is ten episodes of political intrigue, action and character development as the various agendas of the factions involved are put into conflict.

For a show in its third year, The Last Kingdom still feels fresh and ambitious. The show has moved from the BBC to Netflix with a notable budget increase, so battles and sets are suddenly a lot bigger and more impressive than before. This is also why we get ten episodes this season rather than eight. The extra episode-per-book is a good idea, as it allows the story a bit more room to breathe. That fast and furious pace for the earlier seasons was good, but did sometimes feel a bit rushed. This time around, there is more time to digest what is going on. This is especially useful as the story is now unfolding on many fronts simultaneously, with Alfred, Uhtred, Beocca and Brida each getting a fair slice of the action.

The regular cast are on top form, with the show getting its finest dramatic moment when Alfred and Uhtred finally abandon their formal stations and speak honestly to one another about their interlocking lives and destinies. Alexander Dreymon and David Dawson do superb work in this sequence.

There are some weaknesses. The Skade storyline is somewhat dull, not helped by Thea Naess not being the strongest actor in the show's line-up, and it's somewhat merciful when it is resolved mid-season, allowing for a lot more interesting drama revolving around Uhtred and his torn loyalties in the build-up to the excellent season finale.

The third season of The Last Kingdom (****½) represents a show still on top form, with excellent writing, performances and better pacing than previous seasons. It is available to watch on Netflix now.

A fourth season recently finished filming and should air on Netflix in 2020.
Posted by Adam Whitehead at 15:39