SF&F Questions: What became of the Targaryen crowns in A SONG OF ICE AND FIRE?

After a discussion with ASoIaF superfan Nina, the question arose of what happened to the seven crowns of the Targaryen dynasty in A Song of Ice and Fire. This is an interesting question because at one time George R.R. Martin went into considerable detail about the crowns, but their eventual fates are largely a mystery. We can, however, come to some educated guesses about their fates. 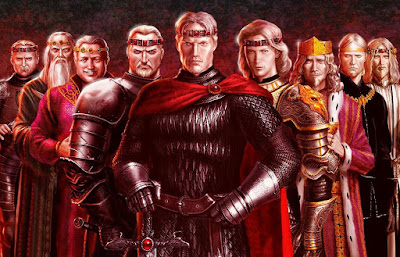 The Seven Crowns
The sixteen ruling Targaryen kings (and one ruling queen, arguably) of Westeros wore seven crowns between them, as follows:


Fate of the Crowns
It should be noted that the ultimate, canonical fate of none of the crowns has been 100% firmly established in the books. However, we can make strong and educated guesses. The first crown was lost in Dorne and, as far as we know, was not returned to the Iron Throne when Dorne joined the realm. Given that Daeron I died in an ambush with a relatively small number of combatants, rather than the chaos of a full-scale battlefield, we can reasonably guess that the crown survived. Whilst it could have been knocked over a ravine or lost in some fashion, most likely it was recovered from the battlefield and secreted away, possibly by a common Dornish soldier but much more likely by a nobleman. The Martells having secured the crown and kept it hidden for generations is quite possible.

The second crown sounds quite hideous and the fact it was never worn against suggests it was probably melted down, broken up, sold or destroyed, possibly on Maegor the Cruel's orders.

The third crown was sold to a Braavosi merchant, so it was likely again broken up, sold on or destroyed for its parts.

The fourth crown's fate is the closest we have to being certain: it was likely utterly destroyed during the burning of Summerhall.

The sixth crown (the fifth doesn't really count, being effectively shrubbery) is the one most likely to have survived intact in the Red Keep or back on Dragonstone. Assuming Robert didn't destroy it, it may simply be on display somewhere, or locked in the treasury, or perhaps "liberated" by Varys for some future royal head?

The seventh crown was the one worn by Aerys II, the Mad King, and it was very likely destroyed by Robert Baratheon, who had a terrible hatred of the Targaryens in general and the Mad King in particular, and would have not let it survive as a symbol for Targaryen loyalists to rally around.

On this basis, both the first crown - the one worn by Aegon the Conqueror himself - and the sixth are likely to have survived in some fashion, and may yet find their way in the possession of a future claimant to the Iron Throne.

Thank you for reading The Wertzone. To help me provide better content, please consider contributing to my Patreon page and other funding methods, which will also get you exclusive content weeks before it goes live on my blogs.
Posted by Adam Whitehead at 19:45

I would guess that crown #6 is in Varys' possession, intended for the crowning of 'his' Aegon Targaryen. No way Robert would have overlooked the fate of Mad King Aerys' crown, but the one belonging to the previous king? Easy enough to extract from a storage room in the Red Keep, and if Aegon is in fact a matrilineal Blackfyre there's a delicious irony in giving him the crown of the Targaryen that put paid to the last Blackfyre heir.