GAME OF THRONES spin-off THE LONG NIGHT cancelled at HBO

In not-entirely-unexpected news, the Game of Thrones prequel spin-off series tentatively called The Long Night has been cancelled after the pilot stage. 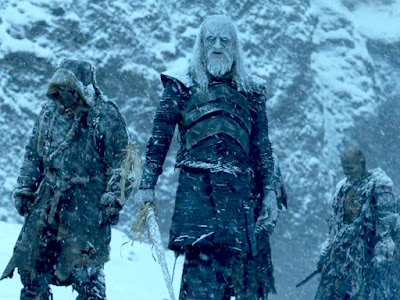 The show, developed under the working title Bloodmoon, was set approximately 5,000 years before the events of Game of Thrones proper and would have explored the origins of the White Walkers, the titular Long Night (the generation-lasting ice age that plunged the world into darkness and almost certainly introduced the unusually long seasons) and the distant ancestors of the great houses from the main series, including the Starks. Executive produced by Jane Goldman, the pilot assembled an impressive cast led by Naomi Watts, Miranda Richardson and John Simm.

However, the lukewarm reception to the ending of Game of Thrones and, in particular, the critical disdain shown for the conclusion of the White Walker storyline may have affected HBO's plans. In addition, part of The Long Night's appeal was its relatively low budget compared to Thrones itself; it turns out that a low-fi show set in the ancient Bronze Age of Westeros may have been a little too unspectacular given HBO's recent spending spree on expensive, premium dramas such as Watchmen (which launched last week to critical and commercial praise) and Joss Whedon's upcoming The Nevers. According to Deadline, HBO's initial reaction to the pilot was lukewarm, and not improved by a re-cut version.

Although The Long Night is dead, HBO is proceeding with more Thrones material. A second pilot has been ordered from producer Ryan Condal, this time for a show set during the Dance of Dragons, the desperate civil war within House Targaryen that saw dragons fighting dragons in the skies of Westeros some 170 years before the main series. With many more recognisable families, locations and, of course, dragons, this series would seem to stand a much better chance of getting greenlit. The pilot will be shot next year.
Posted by Adam Whitehead at 21:58