If you fancy owning a slice of literature history - and are also immensely rich - you can now buy the house where J.R.R. Tolkien wrote all of The Lord of the Rings, most of The Hobbit and a chunk of The Silmarillion. 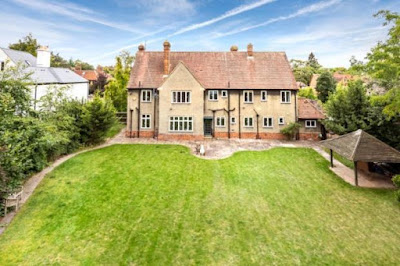 The house is located in Northmoor Road, Oxford, and was where the Tolkien family lived from 1930 to 1947. The house will set you back a cool £4.5 million for a six-bedroom property with a significant amount of space surrounding it. The house was built in the 1920s as a residence for staff at Oxford University, so was pretty new when Tolkien acquired it. The house has been mostly left in the same state it was in when it was built.

Tolkien began writing The Hobbit in the late 1920s, although appears to have only started typing it up around 1930, and it was published in September 1937. Tolkien began writing The Lord of the Rings just a few weeks later, completing it in 1947 (although it took another two years to type up and edit, and a further five years to publish). Tolkien also did extensive work on The Silmarillion whilst living in the property.
Posted by Adam Whitehead at 21:42