Under the Pendulum Sun by Jeanette Ng

In the 1840s, the British Empire has expanded to encompass much of the globe and established embassies in many other lands upon it...and one off it. Laon Helstone is a missionary to the realm of Arcadia, also called the Faelands, which lie beyond the world of science. Having gone missing, his sister Catherine embarks on a perilous journey to find him. Her path leads to the castle Gethsemane, a building of shifting rooms and corridors whose inhabitants are both a help and hindrance. Catherine also uncovers evidence of the fate of the previous missionary, and embarks on a journey of discovery about both this unusual land and her own past. 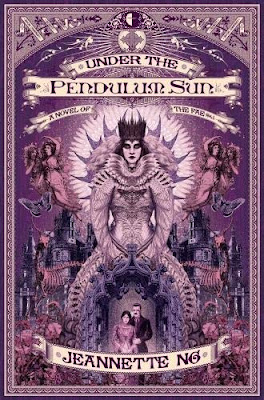 Under the Pendulum Sun is the debut novel by Jeanette Ng. Published in 2017, it won its author the 2019 Astounding Award (formerly the Campbell) for best new writer; her impassioned acceptance speech was the main reason the award changed its name. It's easy to see why the book made such an impact: it's an impeccably-crafted, constantly inventive and continually surprising work of the fantastic.

The premise is that the land of the Fae is real and was contacted by the British Empire, resulting in a mutual exchange of ambassadors, ideas and commerce. Changelings now live in London and British merchants and missionaries now dwell in Arcadia. However, the Fae are difficult to deal with, tricky and ambiguous. Humans have to constantly salt their food lest they fall under the Fae's control and the Fae have a limited interest in human motivations such as money, lust or religion. They do understand such concepts, however, and use them to manipulate people to their own amusement.

The book is told in the first-person by Catherine Helstone as she searches for her brother in Arcadia. This search leads her to Gethsemane, a sprawling ramshackle mansion where the corridors and rooms do not seem to quite coexist as architectural logic demands. Ng notes in her afterword that she was influenced by the Gothic school of 19th century literature and there's a strong element of those books (not to mention Mervyn Peake's Gormenghast trilogy) in the exploration of this strange, rambling house and its eccentric grounds.

There are relatively few other characters, at least to start with, but halfway through the book the cast dramatically expands with the arrival of the court of Queen Mab, a Fae noblewoman who holds the key to the secrets of Arcadia, secrets which Catherine has become obsessed by. This results in a change of pace, from the tight, almost claustrophobic focus of the opening chapters to a larger story with greater stakes and more intrigue. This change of pace helps the novel avoid the fate of so many other "modern fables," which tend to start fresh and imaginative but become staid as they dragged out for too long. Under the Pendulum Sun, on the other hand, keeps the ideas, the revelations and the surprises flowing.

This is a novel of psychological tension, haunting imagery (such as the moon being a sinister fish swimming through the sky, and the sun being a pendulum suspended from a clockwork mechanism) and unravelling mysteries. There are a few moments where the pace flags a little bit, where elements of the story verge on the obtuse, but it's not long before the book gets back on track.

Under the Pendulum Sun (****½) is a striking and powerful debut novel, well-written and characterised, with a strong undercurrent of weirdness and an effective surprise ending. I await the author's second novel eagerly. The book is available now in the UK and USA.
Posted by Adam Whitehead at 11:47