A two-hour Red Dwarf TV movie has been commissioned for release in 2020. 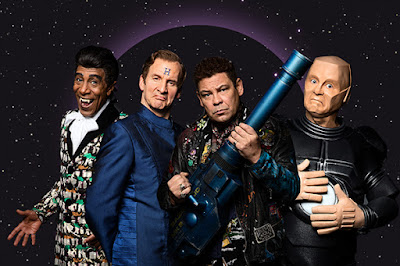 Red Dwarf is probably the longest-running sitcom in the world, in terms of the time from its commissioning without ever being formally cancelled: it was commissioned in 1987, aired its first two seasons in 1988 and its most recent season - its twelfth - in 2017. The show has also spun off a best-selling series of novels and a huge amount of merchandise.

Co-creator Doug Naylor spent many years during the show's longest hiatus (between its eighth season in 1999 and its ninth in 2009) working on a feature-length movie version of the story, several times bringing it close to filming only for funding to disappear. It is unclear if the new film is based on the same script.

The cast's growing age and commitments to other projects (which has frequently stymied reunion plans) has led to some speculation that this movie may mark the end of the Red Dwarf saga. This remains to be seen. For now, there will be some new Red Dwarf on screen in 2020.
Posted by Adam Whitehead at 19:21