Amazon have released a video of the first cast read-through for its Wheel of Time TV show. As well as giving us our first sneak glimpse of dialogue from the show and the actors at work, it reveals at least one new castmember: Game of Thrones' own Roose Bolton himself, Michael McElhatton. 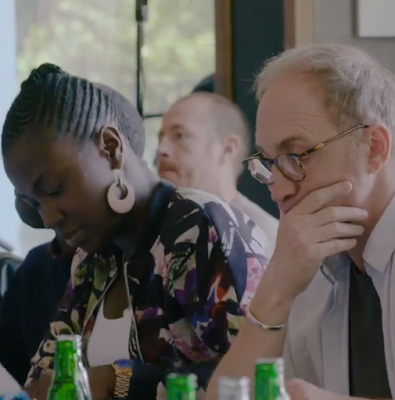 McElhatton, who was most recently seen as a Russian general in HBO's Chernobyl, is seen with the cast but doesn't speak, so it's unknown what role he is playing. However, as it's the first episode, the most likely candidates are Tam al'Thor (whose presence in the TV series is confirmed by showrunner Rafe Judkins), the peddler Padan Fain or the gleeman Thom Merrilin, the latter of whom's casting has been the subject of much debate. More remote possibilities include Geofram Bornhald (if he's introduced earlier than in the book, perhaps in Baerlon) or Ba'alzamon, if they get to the first dream sequence.

Judkins has confirmed that the prologue from the book, set in the Age of Legends, will not be used to open the show (it may be used later as a flashback), which makes it much less likely that McElhatton is playing Lews Therin Telamon or Ishamael as he was during the War of the Shadow.
Posted by Adam Whitehead at 19:15

Where did they confirm the prologue from the book won't be in the first episode?