The AIs and machines are preparing for a final assault on Zion, the last surviving stronghold of the human race. Neo has been offered the chance to spare humanity from annihilation by rebooting the Matrix, an act which will start everything - the war, Zion, the prophecy - again from scratch, but has refused. With humanity's lifespan now measured in hours, Neo in a coma and the Matrix itself being overrun by the rogue Agent Smith program, it appears that all hope has been lost. 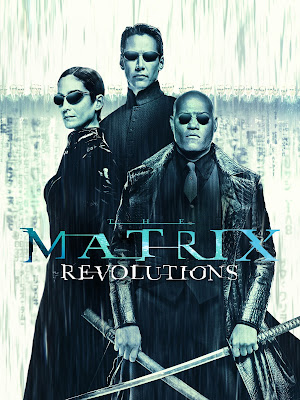 The Matrix Revolutions is a curious movie. If The Matrix was the paradigm-shifting, classic original which blended cyberpunk and Hong Kong cinema, then The Matrix Reloaded was the bigger, faster, "more!" sequel with more fights, more explosions, more CGI and more scope and scale. Also a lot more exposition, and hundreds of times more Hugo Weaving (the film asked us, "How much Hugo Weaving is too much Hugo Weaving?" and still never found a satisfactory answer). The Matrix Revolutions then has to be the weird one, starting off with a strange sequence with Neo lost in the Matrix before he is rescued (in a surprisingly non-drawn out manner) by his friends. From there the crew splits in two, with one team racing back to Zion before it comes under attack by the Sentinel army and the other making its way to the machine city, Zero One, to try to broker a peace. Much of the rest of the film is split between the adventures of the two hovercraft and the defenders in Zion.

This structure is fine as far as it goes, but it does rather obviously have a flaw: not a lot of the film (apart from the very start and the very ending) takes place in the Matrix itself, which given that's what the whole trilogy is about feels weird. Instead we're spending a lot of time with characters we've barely met or seen, apart from Morpheus who really doesn't have a lot to do in the movie (you start to realise why so many stories kill the "wise old mentor" character once the protagonist and thus the story outgrows them).

We do get some great action set pieces, such as the Mjolnir's running battle with a Sentinel fleet through miles of underground tunnels, and the assault on Zion is impressively apocalyptic, even if the script is writing cheques that 2003 CGI can't quite cash. The scenes in which thousands of Sentinels sweep through the Zion Dock and there's so many of them they look like a liquid is impressive, albeit somewhat nonsensical (and it's unclear why, if the Sentinels can do that, they don't just scour the Dock clean in a matter of seconds). The film succeeds in ramping up the stakes, although the fact that none of our regular characters are involved in this battle does remove some of the dramatic tension.

Neo and Trinity get a rough ride in the film, having to battle a human possessed by Agent Smith (Ian Bliss - as Bane - doesn't get enough plaudits for his spot-on impression of Hugo Weaving's Smith) before hitting (rater literally) Zero One and confronting the machines' governing core AI, the amusingly-named Deus Ex Machina. For those who enjoy the Matrix films because they get to see Keanu Reeves kicking a lot of butt, Reeves has surprisingly little of that to do in this movie before the big finale. The ending is also surprising, with perhaps the lack of a massive, apocalyptic finale that people were expecting. Instead, the film draws for its resolution on the idea of an negotiated settlement, a deal between humans and the machines, rather than the machines being wiped out altogether.

This resolution disappointed a lot of fans - who wanted a more definitive, final ending rather than what felt like setup for more sequels - but it does have some virtues. The overwhelming superiority of the machines makes any kind of outright human victory over them implausible in the extreme, so resolving the story in another, logical way which was well-established beforehand is a good move. It also pays off the fans who watched The Animatrix beforehand, which made it clear that the machines are thinking, feeling, sentient beings who have very good reasons to hate and distrust humanity, and the war isn't as one-sided as it seems. Of course, for the 99% of viewers who hadn't (and probably still haven't now) seen The Animatrix, it's an altogether less resonant conclusion.

There are plenty of other things to like about The Matrix Revolutions, such as the lack of overlong, overwrought martial arts scenes (something that bogged down Reloaded), replaced by more realistic fistfights outside the Matrix; the top score (this film easily has the best original score of the three, and the least reliant on pre-existing songs); the relatively intelligent (if not entirely emotionally satisfying) finale; and the reasonably impressive action set-pieces. There are also other things to dislike: some of the elements in the ending are not entirely clear (is Neo dead or not?), the personal stakes in the Zion battle are low (we don't really know these people very well) and, although the film is trying to respect the audience's intelligence by not spelling out every little thing, sometimes this results in obfuscation. For example, I spent ages trying to work out what the machines were doing to Neo's body and how that saved the day before I realised they were activating the source code in the One program, resulting in the Matrix rebooting and removing the "infection" in the process. In short, doing exactly what the Architect told us it would do in the previous movie. It's a smarter ending than I first gave it credit for, but it still feels not well-communicated.

The Matrix Revolutions (***½) can't hold a candle to the tight focus and wild inventiveness of the original film, but it's still a watchable and entertaining action movie, and has both better pacing and a stronger structure than The Matrix Reloaded, and far less overwrought fight scenes. So much of the film taking place outside of the Matrix itself is a bit of a risk, confirming that the "real" post-apocalyptic future is less interesting than it might first appear, but broadly speaking the movie works okay and delivers an interesting, if underwhelming finale. I'm interested in seeing where Lana Wachowski can take the franchise in the forthcoming fourth film in the series. The film is available as part of a box set with its predecessors in the UK and USA.

Email ThisBlogThis!Share to TwitterShare to FacebookShare to Pinterest
Labels: the matrix, the matrix revolutions, the wachowskis