Streams of Silver by R.A. Salvatore

Having successfully saved Icewind Dale from the invading army of the sorcerer Akar Kessell - albeit at a high cost - Bruenor Battlehammer, Drizzt Do'Urden, Wulfgar and Regis embark on a new quest. This time their goal is Mithril Hall, the long-lost homeland of Bruenor. Unfortunately, Bruenor was only a child when the hall fell and has no memory of its location. The companions set out for the cities of Luskan and Silverymoon, hoping they will find clues to the Hall's whereabouts. But danger stalks the party, for the assassin Artemis Entreri is on their tail, seeking the halfling Regis, whilst the mages of Luskan are anxious for news of the Crystal Shard and are determined to recover it. 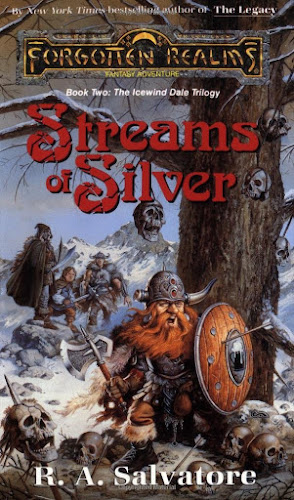 Streams of Silver (1989) is the middle volume of the Icewind Dale Trilogy but mercifully escapes "middle book syndrome" by virtue of Salvatore not planning a trilogy in the first place. The Crystal Shard had to stand well enough alone so that if it bombed, readers would not be left on too much of a cliffhanger for a sequel that would never come. Fortunately, the book did very well and two sequels were commissioned, which are more tightly connected together (the "standalone+duology" school of trilogies, which has an honourable precedent in the original Star Wars trilogy).

Streams of Silver is a less tightly-plotted book than The Crystal Shard and less epic in terms of having large armies clashing, but it's much more of a traditional Dungeons & Dragons adventure. We have our party, who even now get a cool name (The Companions of the Hall™) and they have a quest which takes them across the Savage North of the Forgotten Realms. Many, many later books would also focus on this region but it's interesting to see it in a nascent state here with a lot of the worldbuilding still in a fairly embryonic stage, to the point where Salvatore overlooks the existence of the later very high-profile city of Neverwinter, which is amusing, and Alustriel Silverhand, one of the infamous Seven Sisters, only has two sisters at this juncture. We get a nicely varied story as well, taking in political-magical intrigue in the city of Luskan, a semi-comic interlude in the whimsical wizard hamlet of Longsaddle, a more desperate long-running battle across the troll-infested Evermoors, an angsty stay in the city of Silverymoon (a bastion of peace and enlightenment where Drizzt hopes for respite, only to be turned away because of his dark elven heritage) and a final descent into Mithril Hall, presumably thoroughly checked by TSR's legal team to stave off the J.R.R. Tolkien Estate suing them into the next universe.

An interesting parallel storyline emerges where the assassin Artemis Entreri is hot on our heroes' trail and assembles an "evil party" to bring parity to their encounter, complete with its own wizard, tracker, magical construct and a reluctant guide in the form of Catti-brie, Bruenor's adopted daughter now turned hostage. Given that Catti-brie was barely even in the first book, it's good to see her have some character development in this volume.

There's a lot more female characters in general, including several among the villains, which remedies one of the oddities of the first book. There's a fair bit of action, although not quite as breathlessly over-the-top as in the first book (sadly Drizzt and Wulfgar don't get to take out two dozen giants single-handed, which was stretching credibility just a bit), and Salvatore's writing calms down. No more excited exclamation marks after every other sentence! His prose can still veer towards the cheesy (especially whenever he decides Drizzt needs to be introspective and ponder on the unfairness of the world), but it's easily accessible and straightforward. There's still more enthusiasm than skill here, but it's surprising how much fun that can be.

The novel is very much still in the "Big Mac with extra fries" mode of fantasy literature, but it does make some clumsy nods towards engaging with a big theme when it comes to racism. Drizzt is a dark elf or drow, whose people were cursed and outcast from the rest of elven civilisation ten thousand years ago after betraying the other elven peoples during the Crown Wars. As a result, Drizzt encounters extreme hostility from pretty much everyone he meets. Later Forgotten Realms fiction would cast this event as a grand tragedy, with many tens of thousands of innocent and "good" dark elves punished for the crimes of their evil brethren, with many drow fighting for redemption under the banner of the goddess Eilistraee. At this early stage in the setting's history, though, the worldbuilding is more that all the drow are evil all the time (apart from a small number who are merely totally amoral instead), and Drizzt is the only exception in the whole world. On that basis it's hard to make Drizzt's story about racism work when virtually all the other drow we meet are inherently evil (shades of Dragon Age trying to make a story about bigotry against its mages because the run the risk of being overwhelmed by evil forces, despite the fact that almost every single mage we meet does go insane and get possessed by a demon at one point or another). Later books, which introduce more nuance to the setting, do deal with the issue more successfully.

Streams of Silver (***½) is a reasonable follow-up to The Crystal Shard. Salvatore has improved as a writer, although this is still very much at the enjoyable pulp end of the literary spectrum, and makes a couple of nods at larger themes around racism, homelands and belonging in this book, which are not altogether successful. He does deliver a readable, action-packed story which moves with verve through an interesting setting. With the success of this novel a bit more assured, there's a cliffhanger ending leading into the concluding book in the trilogy, The Halfling's Gem. Streams of Silver is available now in the UK and USA.

Looking at this now it really plays up the murder hoboism of DnD and to a lesser extent Tolkien. Certain categories of creatures are just written off as kill on sight. That sort of works in a Tolkien context, with orcs being deliberately corrupted by Morgoth. But DnD is mostly racist and all humanoids are under a default kill on sight order, unless the module goes the route of forcing the party to choose the lesser and greater evil. If one doesn't treat orcs or trolls as individuals then it's harder to feel sad for Drizzt not being treated as one. And again it's a bit racist that all elves, even dark ones, get to be treated as potential people, presumably due to them having a developed culture and civilization, while tribal societies do not. I don't know how to reconcile this. Part of the joy of DnD and fantasy more broadly is escapism and easy moral choices. The satisfaction of solving problems with a sword that you can't in real life. One can add moral complexity and verisimilitude to gaming and the literature, but that isn't always an improvement.

A surface treatment of D&D doesn't appear to provide morale complexity when its origins are steeped in the brutality of ancient times such as Viking and Celt culture. That's where the creators introduced the concept of alignment, which was meant to provide guideposts for players. The Drow, though a law-abiding society, are Lawful Evil. Drizzt is treated as an individual because of his rejection of not their just their laws but their evil beliefs and worship of the spider queen (I thought I read somewhere that Drizzt is Chaotic Good). Tribal creatures like orcs and trolls are classified as Chaotic Evil, meaning that they believe in causing pain and suffering for no reason - they're opposed to anything good and any laws which would force them to conform to societal control. It's not racism that justifies killing in D&D - it's alignment.