In seismic news, Microsoft have acquired Zenimax Media, their games division, Bethesda Softworks and no less than eight subsidiary development studios in a huge deal worth $7.5 billion or, for context, almost twice what Disney paid for Lucasfilm in 2012. 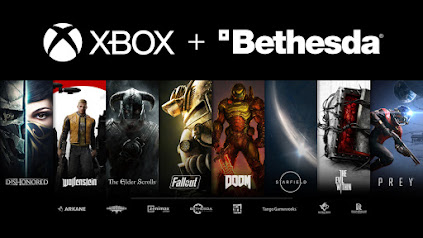 It also means that Microsoft now owns many of the biggest IPs in gaming, including The Elder Scrolls, Fallout, Doom, Wolfenstein, Dishonored and Prey, among many others.

The immediate fallout (so to speak) is to place the release of the next games in those franchises on the PlayStation platform in some doubt. Deathloop and GhostWire: Tokyo, in development at Arkane and Tango Gameworks, respectively, are timed PlayStation 5 exclusives and presumably those contracts with Sony will have to be honoured, but the question is whether other games like Bethesda's next big CRPGs - Starfield and The Elder Scrolls VI (the sequel to uber-hit Skyrim, rumoured to have the working title Redfall), not to mention the further-off Fallout 5 - will remain multiplatform or become X-Box and PC exclusives.

Another strength of the deal is that it allows Microsoft to share out the franchises with other studios. Obsidian, for example, developed the critically-acclaimed Fallout: New Vegas for Bethesda in 2010 and it's been speculated that they might collaborate again in the future. The acquisition of Obsidian by Microsoft meant that was unlikely, but the new deal now makes it entirely possible for Obsidian to work on, say, Fallout 5 at some point in the future (something that would please many fans).

The news comes ahead of the November launch of both the X-Box Series S and X consoles and also Sony's PlayStation 5. In the runup to launch, the X-Box had gained a narrow technological lead over the PlayStation, but the PlayStation's lineup of exclusives was more impressive. With Bethesda's catalogue potentially becoming X-Box exclusive, that may convince some waverers to support Microsoft over Sony. It'll be fascinating to see how this develops.

Update: Microsoft have confirmed that they will honour the PS5 exclusivity contract over Deathloop and GhostWire: Tokyo, and have not ruled out future games appearing on PlayStation as well.

After living through the nineties, is it naive to have more faith in Microsoft now than at any point in their history? With the XBox, they seem to have adopted a "plays well with others" approach in recent years that was unthinkable back then, and something Sony continues to avoid.

So how come it takes so much longer to produce video games than movies? The entire Star Wars sequel trilogy has come and gone in the interim and we're still years away from a successor to Skyrim. I don't want a game or movie a year on any topic, I do not understand why it takes 10 years to do another game in a preexisting universe with a huge pile of already written code. Yes, they might need an updated engine or to change some mechanics,but the basic outline of the game has not changed since at least Morrowind. Will the Microsoft acquisition help or hurt this process? Will they mess with the IPs as Disney has done? Microsoft used to be hated as the evil overlord of the PC era, but now Disney seems to arouse ten times the ire.

Hopefully this doesn't mean that a bunch of games that wouldn't be XBOX exclusivs beforehand, will be now.

Also, if the creative teams and developers remain in place without XBOX shaking up the creative departments, it should be OK. But really, we'll see.

The reason Bethesda are taking so long on the SKYRIM sequel is that they decided to make two other games in different universes first (FALLOUT 4 and STARFIELD).

There's also the fact that making an open-world video game meant to provide 100+ hours of content is always going to take vastly longer than making a linear 2-hour film for the cinema, no matter how elaborate or good it is.

Bethesda Maryland isn't that big a studio either. It's not like Ubisoft's multisite development of their assassin's creed games.

True, although Bethesda does have a few satellite studios helping them out now (one of which, Bethesda Austin, is in charge of FALLOUT 76 and further expansions). But given how modern games require much more development time and effort than even SKYRIM required, that doesn't seem to be helping speed things up much.

Is that true though? It's logical that 100 hours of gameplay should take vastly more effort than 2 hours of video but programmers work in parallel and without all the legal and talent and production constraints that go along with working with A list Hollywood actors.