1888. The Earth is cooling. Some blame a natural dimming of the Sun, others massive volcanic eruptions at Tambora and Krakatoa. The British Empire has made an emergency fallback plan: building huge heat generators in remote locations where small bands of survivors can entrench themselves and wait out the winter. One band of refugees sets out from London and reaches a generator in the nick of time, with a bold captain elected to impose the measures required for survival...no matter the cost. 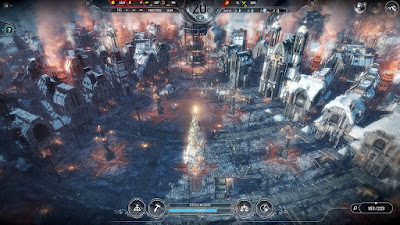 Frostpunk is a survival city-builder game from the Polish 11-Bit Studios. Their previous game, This War of Mine, was a critically-lauded survival game with the player controlling a band of civilians trying to survive in a city in the middle of an active warzone. Although hugely acclaimed, the game was also noted for being quite depressing.

Frostpunk is - relatively - a lighter game about survival, this time for an entire city full of people. Unlike most city builders, where resources accumulate and you can build more stuff, more quickly, Frostpunk constantly keeps the player on their toes with a constant stream of challenges and tasks to manage.

The main issue is keeping the generator running. If it shuts down, the city will be plunged into freezing cold and, even if you can get it back online, morale might take a terminal nosedive. You have to also balance resource-generation and gathering with keeping your citizens safe in their homes (which start as near-useless tents but can be upgraded to bunkhouses and then stand-alone cosy houses), whilst sending out exploration teams to secure resources in the surrounding region, rescuing more refugees and developing urgently-needed new technology, as well as providing medicine, employment and even entertainment.

You also have to make moral choices as the game progresses. Do you keep children safe at home or employ them as extra labourers? Do you turn away refugees who might be more of a burden than a help to your settlement? Should you employ a police force to keep order through discipline or set up a religious order to give the people hope...at the expense of being punished for heresy? Each dilemma has multiple outcomes and sometimes the most moral choice may also be the costliest in terms of lives and time. All the while, a clock is ticking in the background as a devastating ice storm approaches, which can only be survived if you have made all the right decisions and accumulated enough resources.

The game is, surprisingly for a city-builder, fast-paced and frantic. A single campaign of Frostpunk can be played out in four hours, although in practice you'll usually fail two or three times before finding a way to victory. This is a city-builder built on the same "learn from failing" ethos as games like FTL, Dark Souls and Into the Breach, a risky decision since some gamers will despise the idea and be put off. But the gameplay loop is so compelling, each decision and consequence laid out so clearly, that this never becomes a problem. When you fail, you'll almost immediately know why you failed and what you can do differently next time to succeed.

The game has a fair bit of content. The game ships with five different scenarios and two additional ones are available as DLC. Each scenario is more challenging than the one before, with The Arks focusing on building and developing automatons (steampunk robots, more than a bit reminiscent of HG Wells' Martian Tripods) and The Refugees telling a story of literal class warfare. The Fall of Winterhome puts you in charge of a city whose reactor has failed, plunging the city into chaos, with you as a newly-elected ruler having to restore order. The Last Autumn is a prequel, with you having to build a reactor from scratch before refugees arrive. Also present is "Endless Mode," a pure sandbox which removes some of the more punishing scenario limitations and lets you build cities as you see fit, with (wildly) varying difficulty levels.

The presentation of the game is top-notch, with clear graphics and extraordinarily good audio and music. The UI is stripped back and gives you the information you need without overburdening you. The tutorial could be better, as many concepts only really become explicable through trial and error, but early replays of the game are quite enjoyable so this is not really a major problem.

Frostpunk (****½) is fiendishly addictive, extraordinarily clever in design and slickly presented. It can get quite dark and sometimes overwhelming, and I'm not sure if it's the best choice of game to play right now (this review was written during the 2020 coronavirus pandemic), but for those who want a robust challenge, the game is highly recommended. It is available on PC, X-Box One and PlayStation 4 now.
Posted by Adam Whitehead at 21:23