DUNE tabletop roleplaying game gets a name and release window

A new Dune tabletop roleplaying game is on its way from Modiphius Entertainment for release at the tail end of 2020 (although all bets are off because of the pandemic, but hopefully etc). Announced a year or so back, the game now has a logo and a title: Dune: Adventures in the Imperium. 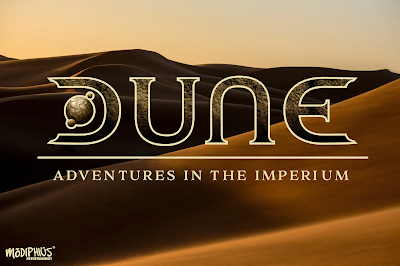 The game will use Modiphius's 2d20 rule set (used in its Conan the Barbarian and Star Trek RPGs, among many others), and, as the title suggests, that the game will be predominantly set before the events of the original novel Dune, in the "classic" version of the setting with the feuding houses of the Landsraad pitted against one another in intrigue with the Emperor, the Bene Gesserit, the Tleilaxu and Spacing Guild pulling the strings in the background.

The original plan seems to have been to coordinate the game's release with the Dune movie from director Denis Villeneuve, which is currently due out on 18 December (pending developments in the pandemic).
Posted by Adam Whitehead at 23:31