Over the last thirty years, Earth, Mars and the Belt have unified to explore and settle the thirteen hundred colony worlds beyond the ring gates. The divisions and damage of previous generations are slowly being forgotten...until the colony world of Laconia launches a coup using protomolecule-based technology. As a new empire rises, the crew of the ageing frigate Rocinante once again find themselves on the front lines. 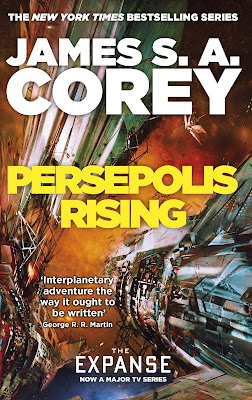 Persepolis Rising, the seventh book in The Expanse, opens with a bit of a non-sequitur time jump as we leap thirty years after the events of Babylon's Ashes. This is an interesting narrative decision, although one that is decidedly undersold: everyone is pretty much exactly where we left them in the previous volume and doing much the same thing, which not so much stretches credulity as shatters it into ten thousand tiny pieces. Time jumps are tricky to get right and can often feel contrived, and the time jump in this book feels rather like the latter.

Once the initial discomfort of that passes, Persepolis Rising ups its game considerably by introducing the Laconian forces as a powerful new player on the scene. There was enough foreshadowing in the previous two books to allow Laconia's rise to feel reasonably organic and the authors do a good job of fleshing out the empire and its hierarchy by using Laconian military officer Santiago Singh as a POV character. There's also some good characterisation as Singh makes choices that seem reasonably logical in isolation but rapidly escalate towards disaster.

Elsewhere, the Rocinante crew get stuck in a very tricky situation and have to escape. This is a fairly good story, but it feels like it should have been a much briefer episode in a larger story. Instead, huge events are happening but then we cut back to our regular heroes plotting to escape...and then plotting some more...and then at the end of the novel they (spoilers!) escape. The main storyline here is treading a bit too much water.

Still, there's some very good characterisation and the authors pull off a major shift in the underlying paradigm of the series relatively successfully. Persepolis Rising (****) is available now in the UK and USA.
Posted by Adam Whitehead at 11:44