WHEEL OF TIME TV series to launch in early 2021

In a new interview between Balance Media and Wheel of Time TV actress and producer Rosamund Pike, it has been confirmed that the show is currently targeting a 2021 release date for its first season. 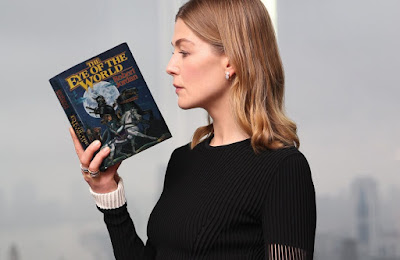 There had previously been debate on this point, with Wheel of Time's first season wrapping filming in May meaning it had a theoretical chance of hitting the screen towards the end of this year, echoing the pattern set by Netflix's The Witcher (which finished filming at the end of May 2019 and was on screens in December). However, Wheel of Time's post-production schedule is expected to be more elaborate than that for The Witcher, making a late 2020 launch more doubtful.

The interview comments (likely from Pike herself or Amazon's interview press packet) seem to suggest that Amazon are now more committed to an early 2021 launch. Previously it had been assumed that Amazon might pull out all the stops to get the show out in 2020 as 2021 will be dominated by the launch of their Tolkien series, The Lord of the Rings: The Second Age, but with that series now looking like a late 2021 release (if not an early 2022 one), The Wheel of Time has more clear air in which to operate.

The Wheel of Time's first season is expected to be eight episodes long and will adapt the first book in the series, The Eye of the World, as well as possibly parts of the second book, The Great Hunt.
Posted by Adam Whitehead at 20:15

Possibly cast but not yet announced. They were announcing castmembers as they started work on each directorial bloc (of two episodes apiece), and since they were only just about starting work on the final bloc consisting of Episodes 7 and 8, they hadn't announced casting for those episodes. I imagine Elayne would definitely be in that bloc and maybe Min (assuming they've moved her from Baerlon - which seems to have been cut - to Caemlyn). It's not impossible they'll introduce Min in Season 2 instead.