In a swanky new trailer for the much-delayed sixteenth Dresden Files novel, Peace Talks, it was surprisingly confirmed that the seventeenth book in the series has also been completed and will be released this year as well. Jim Butcher's Battle Ground will be released in September, just two months after the release of Peace Talks.

The previous book in the series, Skin Game, was published in 2014. The six-year wait has been down to a variety of causes, including Butcher building a new house, a project was went horribly off-schedule. It does appear that Butcher is trying to make good on the delay though, releasing new books at an impressive clip and raising hopes that we'll see another book in 2021 as well. 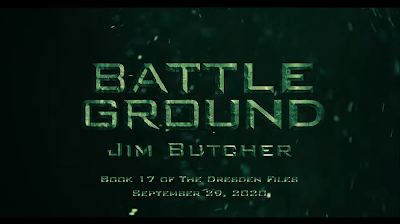 Peace Talks will be released on 14 July 2020, with Battle Ground to follow on 29 September.
Posted by Adam Whitehead at 16:13