1993. The Internet is just starting to take off. Gordon Clark and Joe MacMillan have formed an early Internet Service Provider, CalNect, to help people access the web but decide to sell it when much bigger companies muscle into the scene. Inspired by Gordon's daughter, Haley, they set up a new web directory service, Comet, which rapidly takes off to the chagrin of Gordon's now ex-wife Donna, whose competing service Rover struggles to compete. Cameron returns to the USA to work on a video game, but soon finds herself drawn back to Joe as all the characters get mixed up in the birth of the Internet Age. 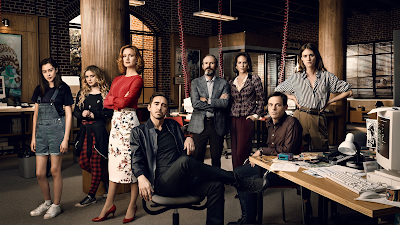 Over the course of three previous seasons, Halt and Catch Fire explored the explosion of personal computing in the USA, the creation of the earliest online networks and the realisation of what a digital future could hold. In the fourth season the characters are, for once, ahead of the curve and predict the rise of the Internet, enjoying considerable success in the process before they are beaten back by the arrival of mega-players like AOL.

As with previous seasons, the show works because it doesn't posit that the characters made all the key discoveries of the period. Instead they are shown as being part of a wider tech movement, with success coming to those who navigate the rocks and shoals of the nascent worldwide web or, more frequently, are luckily in the right place at the right time.

The arc of the season - and arguably the whole series - is about connections, the literal computer connections that drive the businesses and also about the relationships the characters have forged with one another and how those relationships will proceed. Donna is cut off from the rest of the characters for most of the season and it's interesting to see how differently she behaves when removed from the company of those who really know her. Joe has gotten over his "monumental arsehole" schtick from Season 3 and is firmly on Gordon's side throughout the season, which is good to see. The time jump - Season 4 spans most of 1993 and 1994, picking up more than three years after the previous season ended - also allows Gordon and Donna's children to become more important characters, particularly Haley (a superb performance by Susanna Skaggs), and contribute much more to events whilst also discovering their own identities.

The season unfolds much as the first three have, with problems arising, the characters facing them down and then a late-season twist putting them on a different path. This time the twist is much more powerful and profound, and resets the board, allowing them to face the next challenge.

What that challenge is, we don't know because the fourth season of Halt and Catch Fire was deliberately designed as its last. It's not important what happens to the character next, only that we know they go on and keep succeeding and keep thriving whilst leading inextricably to the modern age. Halt and Catch Fire's position as the most underrated drama of the 2010s feel secured because it is a show that knows when to focus on the technical and business sides of the story and when to engage in the emotional side of the characters. It is gripping and rewarding.

The fourth and final season of Halt and Catch Fire (*****) may be the finest season of the entire series (although it's a close tie with Season 2) and is compelling, addictive television. The series is available to watch now on Amazon Prime in the UK and USA.
Posted by Adam Whitehead at 11:38