Electronic Arts have confirmed that their remastered collection of the venerable Command & Conquer video games will arrive on 5 June this year.


The collection consists of:

The collection also features the bonus content from the PlayStation edition, Command and Conquer: Red Alert - Retaliation, including exclusive FMV sequences which have never before been integrated into the PC version of the game.

The collection also marks the formal renaming of Command and Conquer as Tiberian Dawn (its long-standing, unofficial subtitle) and features a total overhaul of the soundtrack by the original composer, along with exclusive new music and restored tracks cut from the original release and bonus tracks brought in from the first-person shooter spin-off, Command and Conquer: Renegade. 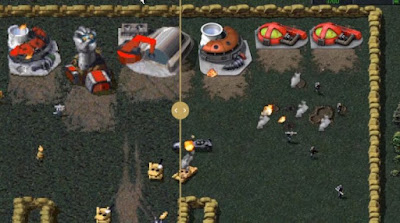 The remaster is a re-vamping of the original games in higher resolution but otherwise untouched, so they are still 2D, sprite-based games. It will be possible to switch between the original, low-res sprites and the revamped graphics at will (in single-player mode). The iconic, cheesy FMV sequences have also been upscaled using the original recordings where possible or with AI algorithms where not.

Those hoping for a remastered collection of the same studio's Dune series of strategy games may be disappointed, as the Dune licence now lies with another studio, Funcom, making a re-release unlikely in the near future.
Posted by Adam Whitehead at 16:37