1986. Nascent online community and games network Mutiny has left Texas and moved to San Francisco to be closer to the heart of the action. Joe McMillan is also in town, having set up his own antivirus company. Mutiny enjoys tremendous success, but the shape of its future direction becomes hotly debated between anarchic founder Cameron and cooler-headed businesswoman Donna, with Gordon feeling caught in the middle. With new hardware on the horizon and a visionary engineer in Europe working on connecting the world's different networks together, it's a time of great opportunity...and risk. 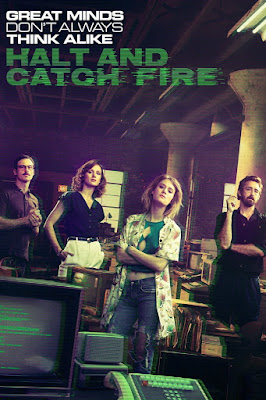 Halt and Catch Fire is the slow-burning AMC drama that was designed - at least in part - to fill the void left behind by the end of Mad Men, swapping the 1960s for the 1980s and guys in suits smoking cigarettes for a more varied bunch of geeks laying the foundation of the digital world we all now exist in. It certainly didn't replace Mad Men in terms of cultural cachet and audience popularity, although it certainly matched it in terms of sheer critical acclaim, and exceeded it in terms of being leaner and more focused.

The third season of Halt and Catch Fire sees almost the entire cast relocate to San Francisco, the sort of plot movement that feels a little contrived but is also not entirely unrealistic. During the real computer boom of the mid-1980s, entire companies did up sticks and move to Silicon Valley to be closer to the centre of the action. The season retains its focus on our five regulars from the first two seasons (Joe, Cameron, Donna, Gordon and Bos) but adds new characters in the form of Ryan (Manish Dayal), a Mutiny software engineer who decamps to Joe's company, and Diane (Annabeth Gish), a potential investor in the company.

The main storyline this season follows Mutiny's troubles as it tries to adjust to an increasingly crowded marketplace and the increasing tension between Cameron's desire to stay true to the company's independent, punky roots and Donna's wish to make the company more successful through standard business practices, such as opening the company to investment and considering potential buyers. Gordon, who is now working at Mutiny as an engineer, is somewhat caught in the middle, whilst Bos tries to placate all sides. In a mostly separate storyline, Joe has given up on his more caring, forgiving outlook from last season and has gone all-in on his ruthless business side, pushing his company to the heights of success at the cost of trampling on all his friends in the way.

This multi-pronged approach separates the characters for huge parts of the season, but last-minute, unexpected plot reversals bring things crashing down and the gang eventually starts reuniting to face new challenges, helped by a time skip to the dawn of the internet age. In just ten episodes, Halt and Catch Fire packs a huge amount into the season and keeps each storyline moving along swiftly.

In terms of overall quality, I didn't enjoy this season quite as much as Season 2. The characters are a bit too separated and Joe's transformation into a semi-paranoid, ruthless businessman feels a little too cliche and a little too close to the real behaviour of John McAffee. There are also moments when the business storyline with Cameron and Donna bogs down a little for an episode or two, whilst the show deals with Gordon's illness from Season 2 by mostly ignoring it, which feels like an odd choice. The fact that this is really an eight-episode season with a two-episode coda does help it regain focus, however, and once the characters are firing on all cylinders again it becomes compulsive viewing

The third season of Halt and Catch Fire (****½) has a few minor stumbling blocks, but overall is gripping and compelling television of the highest order. The series is available to watch now on Amazon Prime in the UK and USA.