America, 2016. Laurel Healy is a documentary film-maker whose latest project is on hold, forcing her to reluctantly take a job in Washington, DC, working for her senator brother, Luke. Laurel hates politics, despite being good at it, but soon discovers an unsettling truth: alien bugs from outer space have burrowed into the brains of senior politicians and are controlling them for their own sinister ends. Laurel has to help stop the bugs, save her brother's political career and negotiate her feelings for a guy from the other side of the aisle. 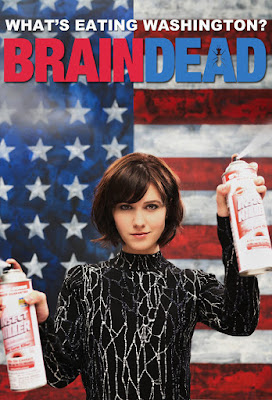 BrainDead - no relation to the Peter Jackson movie - was a one-season wonder which aired on CBS in the USA back in 2016. The series postulates that the reason American politics has become so politicised and insane in recent years is down to an invasion of alien parasites, which to be frank is as good an explanation as any. Combining black comedy, body horror and political intrigue, the series comes across as a mash-up of The West Wing (particularly the prevalence of walk-and-talk scenes), VEEP (except the bugs are more convincing political animals than just about anyone in that show) and Invasion of the Body-Snatchers.

The series stars Mary Elizabeth Winstead as Laurel, who gives a game and just right performance which combines revulsion at what is going on with steely determination and a sense of humour. The supporting cast is capable, especially Tony Shalhoub (Monk) as "Red" Wheatus, who rapidly becomes Laurel's nemesis, and Johnny Ray Gill as Gustav, a paranoid conspiracy-theorist who has to cope with one of his theories turning out to be true.

Although Brain Dead was cancelled after its first season, the show fortunately wraps up all of its storylines so it can be enjoyed as a one-off, 13-episode show and on that basis it works quite well. The tonal variations from horror to comedy to more emotional scenes are fun and the show's signature innovations - comedy musical recaps of each episode (apart from one episode which was so traumatic the narrator gives up and recaps a 1960s Western instead) - are brilliantly enjoyable. This is one show where you'll happily watch the recap for the episode you just finished.

Negatives are that the show plays fast and loose with credibility. It's not always entirely clear why the bugs aren't proceeding more aggressively and, especially when they become aware of Laurel and her friends' opposition to them, they simply don't overwhelm them with weight of numbers. Then again, this is not a show begging to be analysed on a deep level. The other problem is that some may have issues with the show looking for excuses as to why American politics has become so crazed when the real explanations are more nuanced and much more debatable, but again this is a shlock horror comedy about exploding heads and space bugs and not really anything more.

It's also clear why the show was cancelled: this feels like an Amazon or Netflix original rather than a mainstream CBS show. Quirky, offbeat, weird and entertaining, it's certainly enjoyable but you can see why the show did not find a mass audience.

BrainDead (****) is available to watch now on CBS All Access in the USA and on Amazon Prime Video in the UK.
Posted by Adam Whitehead at 10:56