Canadian SF and fantasy writer Matthew Hughes is to write a sequel to Jack Vance's Demon Princes series, with the permission of the Vance Estate. 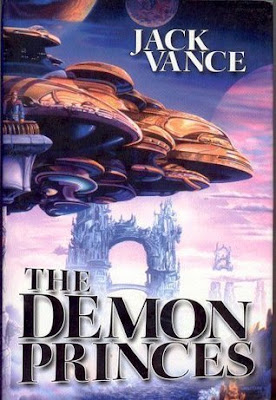 Published in five (short) volumes between 1964 and 1981, The Demon Princes tells the story of Kirth Gersen, a hero sworn to revenge on the five antagonists who helped enslave his people and sell them into slavery when he was a child. Each novel sees Gersen track down and deal with each enemy in turn, and the different situations he encounters along the way.

The sequel focuses on a different protagonist, one of the enslaved citizens of Mount Pleasant who must return to Providence and take back their property from the people who have claimed it in the interim.

Normally I am sceptical of "sequels by other hands" but in this case, it seems more reasonable: Vance himself was highly open to collaboration during his lifetime (Michael Shea wrote a continuation of the Dying Earth saga with Vance's permission) and previously authorised Hughes (and others) to write more works in his Dying Earth saga as part of the very fine Songs of the Dying Earth collection (2009).

The Demon Princes series consists of The Star King (1964), The Killing Machine (1964), The Palace of Love (1967), The Face (1979) and The Book of Dreams (1981), available in various omnibus editions. It is generally considered to be one of Vance's three key, signature series, alongside The Dying Earth and Lyonesse.
Posted by Adam Whitehead at 12:15