The known universe is ruled by the Emperor of the Imperium, Shaddam IV, who serves with the support of the Great Houses of the Landsraad. The growing popularity of House Atreides and its charismatic duke, Leto, spurs Shaddam to ally with the sworn enemies of the Atreides, the Harkonnens, and lure them into a trap by offering them the planet Arrakis - Dune - as a new fiefdom. Arrakis is the source of the spice melange, the most valuable substance known to exist, essential for the Spacing Guild to undertake FTL travel and for the prescient powers of the Bene Gesserit sisterhood. But when the trap is sprung, the young scion of House Atreides, Paul, escapes into the desert with his mother and allies with the native Fremen, whom they start forming into an army. 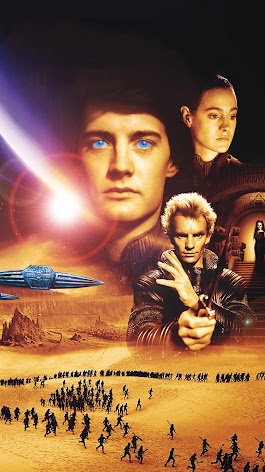 Dune is science fiction's biggest-selling novel, and one of its most acclaimed. Frank Herbert's book, published in 1965, has become a taproot text of modern SFF, influencing everything from the original Star Wars to A Game of Thrones to The Wheel of Time and more. Unsurprisingly, this has made it a ripe prospect for adaptation to the screen. The first attempt, by director Alejandro Jodorowsky, failed in the 1970s due to budget concerns. A mini-series, released in 2000, was never more than functional. Denis Villeneuve's promising new film version is, at this time of writing, unreleased and its quality remains to be seen.

David Lynch's 1984 film version is the best-known adaptation to date and the most divisive. It's a curious film, made by a hugely talented and respected artist but one that was also made in thrall to commercial concerns that inhibited his creative freedom. It feels very much like the same problem that, a decade later, beset David Fincher's Alien 3. Both films emerge as interesting curiosity pieces, but beset by problems.

On the positive side of things, Lynch's film has incredible atmosphere and tone. The industrial gothic set design is impressive and many of the visual effects stand up, including the model work and the imposing sandworms (plus the still-freaky-as-hell Guild Navigator in the opening scene). The costume design is also sumptuous. Lynch is a painter on film, and there are many fantastically-framed shots. This is a film that does not lack for epic imagery.

The cast is also fantastic. For 1984 its cast was as stacked as the 2020 film's is today. Francesca Annis as Jessica, Jürgen Prochnow as Duke Leto, Max von Sydow as Liet-Kynes, Sean Young as Chani, Dean Stockwell as Dr. Yueh, a pre-Star Trek Patrick Stewart as Gurney Halleck, Freddie Jones as Thufir Hawat, Siân Phillips as Revered Mother Gaius Helen Mohiam, Brad Dourif as Piter De Vries, José Ferrer as the Emperor, Virginia Madsen as Princess Irulan, Kenneth McMillan as Baron Harkonnen, Linda Hunt as the Shadout Mapes and, of course, Sting as Feyd Rautha. It's a galaxy of stars, most of whom give their all. Particularly good is Kyle MacLachlan as Paul Atreides, who despite his relative inexperience at this point gives a solid performance and is able to nail both the lighter, more boyish qualities of Paul at the start of the film as well as his darker, more messianic tendencies which evolve as the story continues.

The film does have several key weaknesses. The most notable is pacing. Because the Dune universe is strange and dense, Lynch makes the key decision to spend the first half-hour of the film engaged in laborious exposition. This is completely at odds with his later films and TV shows, where any kind of exposition or context is often missing altogether, and one wonders if his experience with this film made him leery of making the same mistake again. It takes the film 25 minutes just to reach the first scene from the actual novel, all spent in setting up concepts like the Emperor, the Bene Gesserit, the Spacing Guild and the mentats. On top of that we get an introductory speech by Princess Irulan (who otherwise has just one line of dialogue in the entire film) further expanding on the spice melange and the importance of Arrakis. I can't help but feel that maybe Frank Herbert had the right idea starting the action more in media res and explaining things as he went along.

This slow start to the film is something it never really recovers from. Lynch expands a lot of time on the Atreides arrival on Arrakis, the first meeting with Dr. Kynes, the first encounter with a sandworm and so on, so that it takes ninety minutes to get Paul and Jessica to their first meeting with the Fremen. From that point to the end of the movie is just forty-five minutes, so Dune backs in a colossal amount of exposition, characters and action into the same amount of time as a network TV procedural. It's mind-bogglingly rushed, and likely incomprehensible to anyone who hasn't read the book (and even book readers may find themselves bemused from time to time).

Later three-hour cuts of the film - done without David Lynch's approval, and he withdrew his name from them - tried to solve some of these problems by increasing the run time and introducing more exposition, voiceovers and title cards, as well as reinserting some cut scenes, but these don't really help overcome the fundamental pacing problems and may exacerbate them (viewers' mileage will vary, though).

This problem is annoying because there is much here to enjoy. Dune is visually powerful and weirdly interesting, with a stellar cast and excellent location filming in a real desert (a key weakness of the 2000 mini-series is that it had no location filming at all), as well as a great score. But the pacing makes the first half of the film too slow and the second half far too rushed, and too many key concepts from the book are explored only in a half-arsed kind of way. Lynch seems reluctant to remove extraneous book material that doesn't impact on the film, which is why we end up with a pointless Duncan Idaho (who, from a film-only perspective, feels redundant as a character) and the Shadout Mapes, who shows up to offer a warning that everyone already knows about and could have been cut with little loss.

The biggest problem - certainly the one Frank Herbert objected to the most - is the ending, which undercuts the thematic point of the novel and renders the story as an unironic run-through of the Hero's Journey, with Paul as the white saviour/chosen one figure who is going to right wrongs and deliver peace and justice. The novel, and much moreso its sequels, is about the danger of the myth of the "superman" and giving absolute power into the hands of a "hero," with no concern about how it might corrupt him. In this sense, the film fails to deliver the story from the novel, which is more of a warning than a celebration.

If you're already familiar with the Frank Herbert novel, David Lynch's Dune (***) is an interesting interpretation of the book and features much that's impressive. However, the film fails to honour the themes and ideas from the novel (and the ending undercuts them), it is paced poorly and is a little too scared to remove elements from the book that don't work on screen. The film in is an honourable, watchable and interesting failure, but a failure none the less. It is available now in the UK and USA.

I feel like Dune has always been horribly miscast, but I am a stickler for the books and doomed to be unhappy 😀 Gurney Halleck is an ugly lump of a man. Not at all Patrick Stewart, who has limited range and is not good at nonheroic supporting roles. Nor do I see Jose Ferrer as emperor of the known universe and a subtle manipulator who gets outplayed. In the miniseries nobody could be a worse Duke Leto than William Hurt, who is cerebral and the opposite of a dangerously charismatic leader. Part of the problem is Herbert's made worse on film: we're asked to believe that Leto and Gurney and Duncan built so effective a fighting force that the emperor fears them, but we never get any scenes that show them as a team. And the central conflict is really a plot hole. Leto on Caladan is no threat to the emperor, it's only after the emperor appoints him governor of Arrakis and gives him access to the Fremen that he becomes dangerous. And the casting of Leto and Paul always highlights the fact that father and son seem very unalike. I hope this is different with Isaac and Chalmet. We care less about Leto to the extent that he is distant or different from Paul. But I will grant that Sian Phillips as Mohiam is good, Dourif as de Vries would be good if it wasn't shot so weirdly, and I am positively looking forward to Skarsgard as the Baron.

I think Lynch has said in interviews that "Dune" is the film which he was the most unhappy with, in his career. He then goes on explaining that it was kind of a mess in several aspects.

I have to say I did enjoy it, without having read the books (but with my brother around to explain a bit).

P.S: I take advantage of the moment to thank you for this blog, Adam.
I have been reading the Wertzone nearly since the beginning and this is, even with youtube around, my main source for fantasy and Sci-fi stuff, also your movie/TV series reviews are sensible ones, in my opinion.

Hope to keep reading you for as long as it may be. Keep it up. Cheers from Spain.

I remember being in school and collecting the Panini Stickers. 😀 (I was always weird)

I’ve always had a soft spot for Lynch’s Dune and still enjoy it today. It annoys me when people overly criticise it. Dune has to be one of the densest Sci-Fi books I’ve ever read and to think it’s somewhat naive to think everything can be squeezed into a movie a little over two and a half hours. That said, I would’ve love to have seen a Directors cut of Lynch’s Dune. I haven’t watched it in a while, maybe I should watch it again.