Hasbro launched a crowdfunding programme for a new version of classic 1989 board game Hero Quest yesterday. They asked for $1 million to get a new version of the game funded and out to market in 2021. At just under the 24 hour mark, they sailed past the target. With the campaign expected to run until 6 November, it looks possible that the campaign might pull in several multiples of the target. 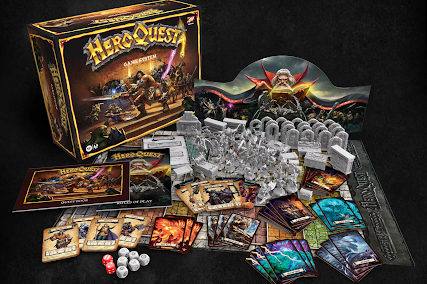 Additional stretch goals will be unveiled after that, with designer Nikki Dawes working on a Druid character class and Teos Abadia developing a further campaign called The Spirit Queen's Torment, which intriguingly will allow orc heroes to join the party.

Controversially, the crowdfunding campaign has only been open to contributors from the USA and Canada. Hero Quest was originally a British game, developed by British designer Baker and co-designed with British company Games Workshop. The game launched first in Britain (ahead of its American release) and was an immense smash hit here, selling hundreds of thousands of copies in the UK by itself. The game was also immensely popular across Europe (particularly in Spain) and Australia as well.

With the game fully funded, it will be launched as retail project via Hasbro's wargaming and board gaming arm, Avalon Hill, in late 2021 and will presumably be available worldwide. The first two of the original game's expansion packs, Kellar's Keep and Return of the Witch-King, are also being rebooted, with a possible eye to the other expansions following.

More information on the game will be revealed at the virtual PulseCon 2020 this weekend.