This broke in January, so isn't new news, but had flown under my radar until now. Back in January, the team at Eaglemoss who handle their starship model collections - Star Trek, Battlestar Galactica, Aliens and others - confirmed that they had been in communications with Warner Brothers about starting a Babylon 5 collection, only to be rebuffed. 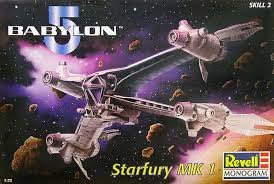 Apparently Warner Brothers' response was that Babylon 5 is currently an inactive franchise. However, this doesn't mean that they're not interested in generating licences, it's just that to do so Warners would have to assemble a licencing team for the property and those people would have to know about the show so as to be able to exert quality control over any tie-in products. This might not be worth it for one project which had no guarantee of long-term success (the head of Eaglemoss expands on this in the episode "Ship Shape" here at 1 hour and 1 minute).

The same excuse was used some years ago when Big Finish Audio, who make Doctor Who and Blake's 7 audio dramas, approached Warner Brothers to make full-cast audio plays with some of the original actors from Babylon 5 and were turned down.

Understandable from a business perspective, but disappointing. Eaglemoss's models are pretty good value for money and reasonably good in quality; not as great as the best model kits, of course, but then you're paying triple the price and you have to assemble and paint them yourselves. The currently have 312 ships in their Star Trek collection, spanning all eras of the show (from The Original Series through Picard, with Lower Decks on the horizon and even catering for things like ships from Star Trek Online). They currently have 20 models in their Battlestar Galactica collection, spanning both the original 1978 show and the 2003-09 reboot (note that their BSG collection has a buy one, get one half-price currently going on for today only), with more planned, despite a relatively small number of ships being available in that franchise. They've even managed to put together ten ships to form an Aliens/Predator collection, with more figurines and statues available.

Babylon 5 has many dozens of ships that could make it into such a collection, including the titular Babylon 5 station, the Starfury fighter and capital ships such as the Omega-class destroyer, Sharlin-class warcruiser and Primus-class battlecruiser. Babylon 5 models have been available in the past, such as a Starfury fighter and a B5 station released by Revell in the late 1990s and a line of metal miniatures from the Babylon 5 Wars game from Agents of Gaming and Mongoose Publishing's A Call to Arms miniatures wargame in the early 2000s. There was also a line of small Micro Machines toys released in the late 1990s. However, based on the quality of their Star Trek and BSG lines, an Eaglemoss line would be superior in size and quality.

Warner Brothers have continued to treat Babylon 5 in a lukewarm fashion recently, resisting calls to release an upscaled version of the show for Blu-Ray, whilst sending mixed messages on the chances of a reboot or more comprehensive remaster. Babylon 5 is a relatively obscure property compared to Star Trek or Star Wars, but it has made WB over half a billion dollars in profit since its inception in 1993, which is nothing to sneeze at, and the show retains a loyal fanbase who'd snap up such a collection eagerly.

Babylon 5 is my favourite franchise and I would have to get this if it were released.

I genuinely don’t understand Warner Brothers attitude toward B5, which has been dismissive at best. Interesting that it has made them so much money. A wasted opportunity.