A war is raging through all of time and space, spanning an infinite number of universes. Two great powers - the Commandant and the Garden - are clashing, their agents fighting one another in the stone age and a distant future of galaxy-spanning empires. Two agents, Red and Blue, clash again and again without ever exchanging a single word...until the day they decide to start writing letters. 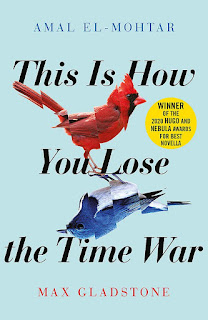 This is How You Lose the Time War is a novella depicting a war fought through time between two implacable forces, each represented by one of their agents. It's a short book, at under 200 pages, and also an interesting one structurally, mixing traditional third-person narratives with the letters the two rival agents exchange on a regular basis. It's not quite an epistolary novella, more of a mix between it and more traditional narration, but the letters form an integral part of the story.

Although short, the novella covers a lot of ground. Multiple settings, from deep space in the far future to a sinking Atlantis to contemporary cities, are used as battlegrounds by the warring sides, and we see both the hard end of their fighting and meet the vast and almost staggering forces leading the wars. That said, there isn't a lot of exposition in the book. The reasons for the war - given that billions, if not trillions, of branching timelines exist for the two factions to coexist in - are never really given and it's unclear who is winning and losing (although both Red and Blue are prone to boasting of their side's achievements, at least early in their relationship). To be honest, it's not really important. More important is how alone and isolated both agents feel, and the only person they can relate to is their opposite number, doing the same thing and feeling the same feelings, just in a different cause.

The writing is poetic, with both agents keen to use creative language in their letters, which start off as verbal fencing matches but later become more flirtatious and intellectually challenging. There is humour in the book but also an air of bitter-sweetness. There's also tension: agents from the two forces are forbidden from communicating with one another out of fear of corruption, and it's not always clear it the agents are genuinely becoming enamoured of one another or each is trying to trap the other in an unexpected reversal. It feels a bit like Spy vs. Spy with added romantic tension, all set in the middle of Doctor Who's Time War.

This is How You Lose the Time War (****½) is short, focused and energetic, playful in tone and compelling in execution. Those who like books packed with exposition with every I dotted and every T crossed will probably be unhappy with the book's unapologetic lack of context; those who enjoy stories for their emotion and wordplay will be very satisfied. The book is available now in the UK and USA.

Email ThisBlogThis!Share to TwitterShare to FacebookShare to Pinterest
Labels: amal el-mohtar, max gladstone, this is how you lose the time war

It sounds similar to (if not influenced by) "The Big Time" by Fritz Leiber...