The planet Sera is under attack by the Locust Horde, a race of subterranean creatures which have emerged to kill every human on the surface. A massive orbital strike to kill the creatures has been ordered, sacrificing much of the planet to protect the last redoubts. But the Locusts have survived and continued their onslaught. Sergeant Gabriel Diaz and his squad of troops are ordered to find and eliminate a powerful Locust leader, Ukkon, to help hold back the tide. 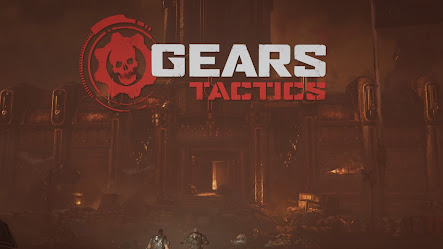 Gears Tactics is a spin-off from the perennially popular Gears of War series of third-person shooters, which popularised the "cover shooter" school of action games. The series is infamous for its real-time, intense battles against enemy forces, fought by square-headed, wide men kneeling behind waist-high walls (which the planet Sera is absolutely inundated with for no readily-explainable reason). After five mainline games of fierce action, it was decided to give the series an...XCOM-inspired, turn-based tactical spin-off? It's an odd choice which ultimately becomes interesting.

To be clear, Gears Tactics features only half the gameplay of an XCOM-style title. There's no strategic metagame, where you make decisions back at a base. The closest is a brief R&R stop between missions when you can equip troops with the fresh gear you've picked up from the last battlefield, then it's straight back into the turn-based fights. There's been a few XCOM-alikes which have oddly dropped this feature when it's one of the things that makes XCOM so great, but to be fair a few of them (like the underrated Hard West) have made it work really well. 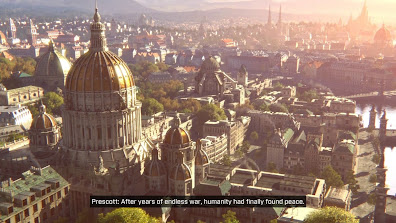 Gears Tactics...doesn't. Or at least not after a while. At the start this direct approach is refreshing, with the action focus and no need to worry about other stuff. Your troops go straight onto the battlefield and you can move from cover to cover, looking to outflank the enemy to get the drop on them with your firearms or get close enough to use a grenade. Your troops are divided into five classes: nimble Scouts, heavily-armed Heavies, melee-slicing Vanguards, medic-like Supports and long-range Snipers. However, you can only take four troops on any one mission. You also have several hero characters (two at the start, with two more joining through the game) who sometimes have to on missions and sometimes are optional. You can flesh out your troops with new recruits, whom you can level up throughout the game.

The XCOM-alike battle mode is fine. You get 3 actions per turn rather than the industry-standard 2, and you can still move after shooting. These make battles a nimbler, more aggressive fair than many games in the genre. Battles are also more visceral, with a focus on melee finishers to take out injured enemies (which also grant your other characters bonus actions) and a fair bit of gore. Despite this, the game is still pleasingly tactical, with each character having a generous skill tree and lots of abilities they can develop and use. The graphics are solid, the action satisfyingly chunky and it's mostly great fun. There are weaknesses to the mode, though. The game's focus on real-time lines of sight rather than tiles from other tactics games means it's sometimes hard to work out if you're in an enemy's overwatch cone or not (or if leaning out of cover to shoot will put you in the cone). The game is also obsessed with cooldowns as a way of limiting your abilities, even if this is illogical. A good example is grenades and healing kits (although, in amusing Gears logic, these also take the form of grenades). Instead of only having a finite number of grenades, you have infinite grenades but they're on cooldowns, with it taking 3-5 turns before you can use a grenade again. Why? Reasons.

There's also limited information feedback. Sometimes an enemy will be standing out in plain sight three feet from you and your pointblank shotgun or pistol shot has a less than a 100% chance to hit. There's also no bonuses for catching enemies outflanked. The overwatch system feels decidedly inept as well, with enemies being able to move in real time as they pass through your overwatch cone, which means they can simply avoid most of your gunfire by moving at the same time, which is a novel choice in a supposedly turn-based game. 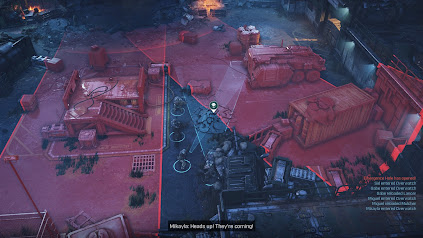 Still, for the most part the turn-based action is fine and entertaining. The problem more stems from the game's decidedly unnecessary length. Whilst most Gears games clock in at around 10 hours or less, Gears Tactics is three times as long. If this was down to a complex and engrossing narrative, that would be great, but it's not the case. Story missions are comparatively rare, with the game auto-generating several random skirmishes from a number of set types between narrative missions. The first time you play them, these are great fun. By the 10th or 15th time you find yourself having to advance through a level ahead of a creeping bomb barrage, or rescue captured soldiers from sarcophaguses, or blow up a tank of alien goo, the sheen has well and truly come off the game, replaced by the merciless grind. This isn't helped by the new enemy types who join the fight being mostly just the same as the one-hit mooks you can kill in their thousands, just vastly more bullet-spongey.

The game also has a poor interface for managing equipment. Between missions you can upgrade your soldiers with new sights, stocks, magazines and barrels. Each upgrade is almost negligibly beneficial on its own, but stacks with other upgrades (and your character's skills) to create more significant bonuses. The game gives you very little way to parse this information and after a while I stopped really bothering, only giving the equipment list a quick scan after each battle and slapping on a new bit of kit if it seemed good and not checking the synergy with everything else. The fact this worked fine for the entire game means the upgrading system ended up being a fairly superfluous, near-waste of time. 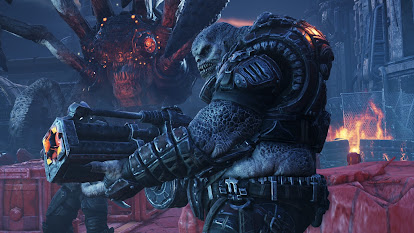 The story, about cube-headed men who've been fed on steroids since birth and their completely normal-sized female comrades, is splendidly nonsensical gubbins about aliens but they're not aliens, they're from underground and are maybe genetically-engineered monsters or maybe something else, but they're all evil and must die so who cares. Gruff men glower at one another over campfires whilst their government plans to stab them in the back for some reason and so forth. It's the finest cheese wrapped around a massive slice of corn. It would be more engaging if it wasn't so massively drawn out for really no reason other than to make players feel like they're getting their money's worth. Annoying, because (like Alien: Isolation) if the game had been half the length and half the price, it would have been a much stronger experience.

Gears Tactics (***½) is a mostly enjoyable turn-based tactics game, and a perfectly viable time-filler for XCOM or Phoenix Point fans waiting for their next big hit. The lack of a strategic metagame does limit any kind of replayability, and the second half or so of the 30-hour campaign does descend into a merciless grind of repetitive missions undertaken solely to level up your equipment agonisingly slowly by almost unbearably tiny, incremental amounts. If you can survive this, there's some solid boss battles at the end of the game and some fun to be had. But Gears Tactics does feel like another victim of the modern mentality to stretch games out way past their sell-by date. The game is available now on PC and will be released next week on X-Box One and X-Box X.