For the first time, a Hugo Award for Best Video Game will be awarded at WorldCon 2021 (DisCon III), to be held in Washington D.C. 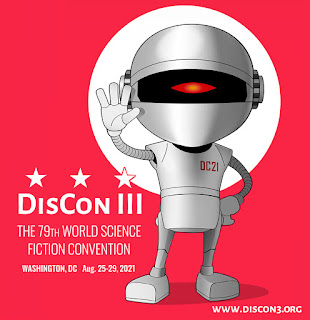 Organising committees have the ability to authorise a discretionary category at the Hugo Awards without going through the normal, multi-year process for adding a new permanent category to the awards. A video game category has been debated several times before but has never gained enough groundswell of support to be added full-time. It looks like DisCon will be using this opportunity to trial the idea to see how many people vote for it and support the notion going forwards.
Many, if not most, video games fall into the science fiction or fantasy. Seven years ago, I made a post about video games that engage with their SFF themes in a bit more detail (it's probably about time I did a follow-up). With video games having been commercially available for forty-five years, and having been more popular than either the film or music mediums for more than twenty years, it is probably past time this move was made. I suspect far more people voting in the Hugos have played an eligible video game in any given year than have read a semiprozine or read a novelette, for example.
Assuming normal rules of eligibility, the following video games would be among those eligible for the award in 2021:
It is unclear if a game would count if it was re-released or remastered. For example, Final Fantasy VII Remake would count under the award's own rule of being a "significant modification" of the original game, not to mention the fact that it is also an alternate-universe retelling of the original game (i.e. the events of the original game and the remake actually coexist within the storytelling universe as different entities). However, it is unclear if FFVII Remake would be eligible for just 2021 or 2022 as well, since the PC version and possibly X-Box and PlayStation 5 versions of the game will not be released until next year. In addition, it is unclear if, say, Horizon Zero Dawn would be eligible: the game was originally released on PlayStation 4 in 2017, but on PC in 2020 and a potential PlayStation 5-specific version in 2021. It's also unclear if this year's relatively mild graphical remaster of Spider-Man (originally released in 2018) would make it eligible again.
These rules I suspect will be clarified relatively shortly.
Posted by Adam Whitehead at 20:25

File 770 shared a press release from DisCon III that goes into more detail about what's eligible:

About damn time. I didn't really get into modern video games until about 10 years ago, so I understand somewhat the reticence of people who don't want to add games to the Hugo. But by my personal clock video games have been making content that is as great as any novel since at least 1999's Planescape Torment, so it's long past time this is recognized. I'm glad that GRRM who was anti video game lost out in this particular instance. If I could ask the fantasy gods for one thing, I think it would be for Joe Straczyinski of Babylon 5 fame to do a video game, since he's published in every other genre except video, and I would really like to see him do something epic in a game.

Adam, not really a comment but a personal note. if you come to Washington DC for this event I'd be more than happy to buy you a beer, or several. Obviously I greatly enjoy your commentary. I have the bandwidth to read one blog on Sci fi and fantasy and you are it.