Gateway Station, 2179. Rescued after spending fifty-seven years frozen in deep sleep, Ellen Ripley, last survivor of the Nostromo, is horrified when her reports of the lethal xenomorph that wiped out her crew are dismissed as mental delusions. She is even more horrified to learn that the planet where they found the alien is now home to a bustling colony. When all contact with the colony is lost, the Colonial Marines are called in to investigate with a huge amount of state-of-the-art firepower and Ripley is offered the chance to put the horror to rest...or unleash a new one. 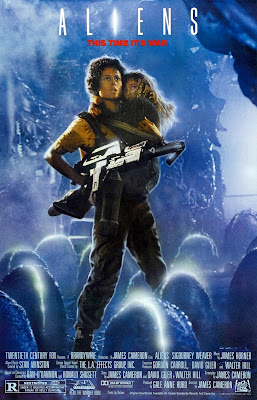 Even in 1986, Alien was an acknowledged masterpiece of science fiction and horror cinema. The idea of creating a sequel to it felt like a risk, especially when the job fell to a relatively young Canadian film-maker with only a single proper movie to his name. Fortunately, the film-maker was James Cameron and the previous film on his CV was The Terminator, marking him as a promising director to watch.

Aliens more than fulfilled that promise. Arguably the strongest film in the franchise and much less-arguably one of the greatest action SF movies ever made, Aliens is that rare film which is near-flawlessly executed. The cast is fantastic, the writing is tight and the effects are impressive whilst informing and reinforcing the story and its themes of PTSD, cultural alienation, motherhood and family.

It's this attention to the film's psychological angle as well as the more superficial elements of action and explosions which makes it tick, and is something that Cameron exploits well in most of his films. Ripley was just one crewmember on the Nostromo, her late emergence as the main protagonist meaning we didn't get to know her very well. The sequel rectifies that in spades, revealing that she had a daughter (now deceased) and a home life which the xenomorph took away from her forever, as well as preventing her from ever getting a good's night's sleep again. Cameron also layers the film with a surprisingly robust layer of realism: Ripley for very obvious reasons doesn't want to go anywhere near the alien ever again, but just knowing that the ship and its thousands of eggs are still on LV-426 is enough to cause her to experience terror, justifying her decision to go back.

There is a robust intelligence to Aliens which is, quite simply, largely missing from most modern films and TV shows. The marines react fairly realistically to the situations they find themselves in, the characters react with logic to the tactical disadvantage they are in and the aliens' reluctance to attack the facility en masse is explained by their own limited numbers (there are only about a hundred aliens, as there were only a hundred colonists on the planet to be impregnated) and the steps taken to keep them in check, such as the sentry guns and the humans' weapons which can kill them with relative ease. Aliens delivers both a cathartic power fantasy - Ripley and her comrades blow away dozens of xenomorphs when just one wiped out her entire crew in the first film - but also a fragile one, as when the marines are picked off (mostly through logic than them acting like idiots) and the main characters suffer serious reversals. There is an integrity to Aliens' script and its respect for the intelligence of the audience that should be included in every basic scriptwriting class in Hollywood.

Which isn't to say that Aliens is all logic and themes. It brings a huge amount of action carnage to the table, with jaw-dropping set pieces following in at times dizzying succession. The marines trade quips and insults with lived-in believability. The cast, from Sigourney Weaver's multi-faceted Ripley to Bill Paxton's blustering Hudson to Michael Biehn's stoic Hicks and Lance Henriksen's earnest Bishop - is uniformly brilliant, from the bit-part marines who might as well be wearing red shirts up to the main stars. The production design, mixing Alien's industrial aesthetic with a sleeker, slightly more futuristic office chic, is impressive. James Horner's soundtrack starts off minimalist and restrained but later goes into speaker-straining bombast, but always in a way that reinforces the action. Even the film's sound effects are iconic, from the dread-inducing beeping of the motion trackers to the distinctive fire of the pulse rifles to the organic terror of an egg opening.

Trying to identify a weak point in Aliens (*****) is difficult. Arguably the Director's Cut addition of scenes set in the pre-carnage colony undercuts the later tension by showing the colonists finding the crashed ship, but seeing the fully-lit and inhabited colony in "normal" mode and Newt before she becomes a catatonic mess does add more pathos to events later on. Perhaps the idea that no human crewmembers would remain on the Sulaco when the operation starts is a little too convenient. These are really minor issues, though, and should not detract from the film's place in the canon of SF classics. Aliens is a masterpiece of both horror and SF action.

A note on edition: there are numerous editions of the Aliens movies available. Probably the best is the Alien Anthology Blu-Ray box set, which features both the original cinematic editions and extended versions of all four main-series Aliens movies, complete with tons of special features. This is available now in the UK and USA.
Posted by Adam Whitehead at 20:47

For me, the scenes in the Director's Cut with the sentry guns mowing down aliens futilely while the ammo count ticks down (oooh the tension!) more than make up for any downside to the reveal being spoiled.

They obviously had a lasting impact on people, Instructables is full of plans for making NERF sentry guns, some of which even use Raspberry Pis and LIDAR sensors for motion detection :D