A brand new XCOM game is coming out this month

2K Games have surprise-announced a brand new game in the XCOM franchise which will be released in just ten days. XCOM: Chimera Squad is a new, stand-alone game that will act as an interlude between XCOM 2: War of the Chosen and...whatever comes next (XCOM 3, one hazards). 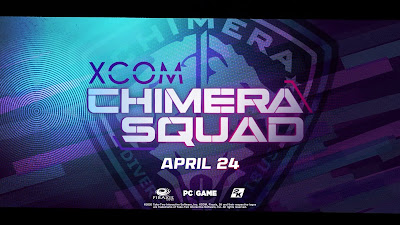 Chimera Squad is set in City 31, apparently after the XCOM-led human resistance defeated the alien occupiers in War of the Chosen and drove them off-planet. With the alien Ethereals gone, many of the other aliens they were controlling have broken free and joined forces with humanity. Chimera Squad is so-called because it is the first XCOM squad with alien recruits among its number. Whilst XCOM is rebuilding to face a renewed threat from the Ethereals (or the mysterious enemy they themselves were fleeing), it is also dealing with more hostile aliens who have gone to ground and also with human groups unwilling to work with their former enemies.

Chimera Squad isn't quite a full-blown entry in the XCOM series, instead consisting of a 20-hour campaign of preset missions with pre-generated characters with their own personalities, custom dialogue and in-mission character development. In that sense it is more reminiscent of the XCOM 2 Tactical Legacy Pack from a couple of years ago, which added linear, story-driven campaigns to the more familiar strategic gameplay. The game also adds a new Breach mechanic to the game and expands on the idea of teamwork from War of the Chosen, which allowed you to develop relationships between characters which yielded in-mission rewards and special abilities.

XCOM: Chimera Squad will be released in 24 April and is currently available for pre-order at the price of £8.50, or $10 in colonial currency.
Posted by Adam Whitehead at 20:21