Three years have passed since a sorcerous curse was lifted from the royal family of Chalion. Chalion and the western kingdom of Ibra have allied and now prepare for a military campaign against the Roknari principalities to the north. Ista, the Dowager Royina, is far removed from such concerns. The lifting of the curse has returned to her a sense of self and intelligence, but her family is still treating her as a pariah. The removal of her children to the capital and the death of her mother have left her without purpose, so she plans to make a pilgrimage in honour of her memory. But it appears that destiny still has plans in mind for her. 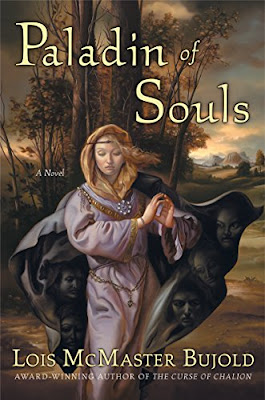 Paladin of Souls is a loose sequel to The Curse of Chalion, although you could probably get away with not reading the previous novel. This book is primarily a stand-alone story revolving around Ista, the mother of the new Royina of Chalion, who finds herself at a loose end as her family moves on with their lives without her. Ista was a minor character in The Curse of Chalion, where she was often confused and frightened. Here, in her own story, we meet a much more capable and intelligent woman, but one who is frustrated at being treated as a near-invalid by her family.

This is an unusual epic fantasy in some senses. The protagonist being a middle-aged woman is a relative rarity in the genre and its primary thematic concern being with establishing or re-establishing a purpose in later life is a universally relatable one. There is also a lot of more familiar fantasy tropes, including romance, epic battles and formidable sorcery. Lois McMaster Bujold is one of the most talented authors working in either science fiction or fantasy, with excellent prose skills and great characters, and she blends these elements together again her to create a novel which is vivid and engrossing.

It's not quite as successful as The Curse of Chalion, although it's close. Paladin of Souls has a somewhat slighter story than its forebear but unfolds over around a hundred extra pages, making it feel at least a little flabbier and less-focused than the previous novel. The book also spends a lot of time establishing the secondary cast in the opening chapters, but surprisingly only a couple of them played major roles in the denouement, the rest either just hang around or disappear for large stretches of time. They're a fun bunch of characters but ultimately don't feel like they have a clear purpose in the book.

That said, Bujold's world of the Five Gods remains an intriguing creation, effectively a magic-heavy version of Iberia in the 15th Century (fans of Guy Gavriel Kay's The Lions of Al-Rassan will particularly enjoy this novel and its forebear, I believe). The characters are sharp and some of the plot twists are quite clever.

Paladin of Souls (****½) is a strong fantasy novel revolving around themes of love, war, family and honour. It's one of Lois McMaster Bujold's most critically feted novels, having won Best Novel in three of the genre's biggest awards, the Hugo, Nebula and Locus. The book is available now in the UK and USA.
Posted by Adam Whitehead at 16:30

Email ThisBlogThis!Share to TwitterShare to FacebookShare to Pinterest
Labels: lois mcmaster bujold, paladin of souls, the curse of chalion, world of the five gods