The Broken Heavens by Kameron Hurley

The Tai Mora, invaders from a parallel universe, have overrun and conquered much of the island-continent of Grania. Their ruler plans to activate the five great temples and use their power to seal the ways between the worlds shut, ending the chaos that has engulfed every world and every timeline. For Lilia, the former scullery maid turned military leader, an opportunity to strike back at the Tai Mora is approaching, one that may hold the key to saving the world, but she must first persuade her reluctant allies (who prefer the idea of flight) to stand with her. 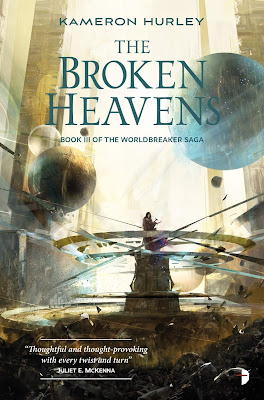 The Broken Heavens is the concluding volume of The Worldbreaker Saga, Kameron Hurley's epic fantasy trilogy set in a world that is being invaded by mirror versions of itself. Following on from The Mirror Empire and Empire Ascendant, the book chronicles the adventures of a number of core characters scattered across Grania as events begin to converge.

The Worldbreaker Saga is, as with much of Hurley's fiction, offbeat and weird but is anchored in believable human characters. The book plays with the "chosen one" trope by pitting these as the people who happen to be in the right place at the right time to deal with the crisis, and they succeed or fail, live or die based on their own strengths and weaknesses, and isn't afraid to have them mess up, sometimes catastrophically. It's unusual for an epic fantasy following a standard three-act trilogy structure (albeit in an original and unusual world) to be so inventive in how it handles its characters and plot.

Particularly interesting, and something much more strongly focused on here than previously, is the idea of the mirror characters being not just different characters with the same face, but different versions of the actual same character: the pacifist in one world and the war-mongering dictator in another could have been the same person if it were not for circumstance. Thematic ideas of nature/nurture, environment and desperation are woven intriguingly into the story and developed as it continues.

Some of the weaknesses of the first two books remain: there are occasional moments of obtuseness and the limits of the magic-wielding characters' powers are not always clear. There's also the feeling of events sometimes being a little rushed. There's easily a more sedate thousand-page story which could have explained things a bit better lying within these sometimes compressed-feeling five hundred pages. On the plus side, it does mean that the book moves like it's on fire, with little time or pages wasted.

The setting, with its living killer trees and seething organic temples, is vividly drawn and Hurley's formidable powers of characterisation are at their peak here, not just in depicting different characters but different versions of the same character, which requires a great deal more nuance. Overall, The Broken Heavens (****½) is a worthy conclusion to an often engrossing and original work of fantasy. The novel is available now in the UK and USA.
Posted by Adam Whitehead at 13:56