The kingdom of Dhai stands on the brink of disaster, threatened by a vast invading army from a mirror dimension which has already obliterated the powerful northern empire of Saiduan. Ahkio, the inexperienced Kai or spiritual ruler of Dhai, is forced to make unpalatable decisions to prepare his small, brave and peace-loving kingdom for war. The price for saving Dhai may be to sell out its soul. Meanwhile, the Empress of Dorinah sends her best general, Zezili, south into the kingdom of Tordin on an errand that will have a profound impact on the coming conflict, and the entire world. 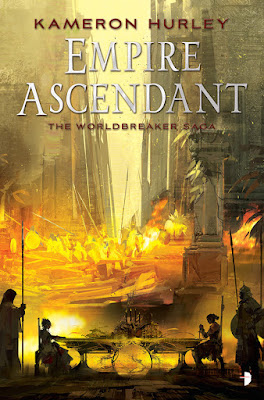 The Mirror Empire was a decent opening to The Worldbreaker Saga, introducing a wide swathe of interesting new ideas, delivered in the author's trademark take-no-prisoners style. At the same time, the book undercut its promising opening with a whole lot of confusion, launched a sustained assault of invented terminology and context-less worldbuilding that left a lot of readers scratching their heads. Towards the end of the book, as the worldbuilding, character development and thematic ideas started coalescing, it picked up and ended on a reasonably intriguing note.

Empire Ascendant picks up on that promise and delivers it with the force of a brick through your window. The book explodes into life at the start and doesn't pause for breath. After the much bittier and more inconsistent Mirror Empire, Empire Ascendant is resolute, determined and focused, which is a great relief.

The core characters remain the same as previously: Ahkio, Zezili, Roh and Lilia, along with a number of more minor POV characters, including some of the so-called "villains", now humanised by allowing us to see events from their points of view. In particular, the alternate Kirana, the ruler of the dying world who is desperately trying to save her people by evacuating them to Grasia using portal-opening rituals that can only be fuelled by blood and death, is made more relatable. Although still a mass-murdering tyrant, Kirana believes her actions are necessary as the only alternative is to let her world die and her people be completely wiped out. This puts the actions of our more "heroic" characters in Grasia in a different light as they are also forced to adopt more and more desperate tactics (including sacrificing hundreds of lives in feints and using scorched earth tactics to deny the enemy resupply) to survive.

Empire Ascendant's greatest success is taking the characters and archetypes we thought we'd gotten to know and reinventing them. Lilia could be - on a bare, simplistic level - be seen as a Daenerys Targaryen figure, a young girl who gains tremendous and far-reaching powers which we expect her to use for good. Events don't turn out that way and Lilia developers a ruthless streak which the reader can cheer when she is deploying it against the invading Tai Mora but then becomes a bit disturbing when she advocates tactics that will kill hundreds or thousands of innocents but it is justified because it inconveniences the enemy. Other characters go through similar emotional wringers and transformations but retain their credibility.

The story develops at a relentless, page-turning pace: this is a 500-page book which catches fire early on and never goes out. The confusing morass of moons and satellites and astronomy and astrology from the first book is made a lot more understandable here, so the significance of certain satellites appearing and disappearing is now clearer. Armies march, lots of things blow up and there's a lot of betrayals and daring escapes, as well as hideous major character deaths. It's a dark book, but one where there are shades of hope and light as well.

Empire Ascendant (****½) is a far more dynamic, impressive and vital novel than its forebear, and may be Hurley's finest work to date. It is available now in the UK and USA. The concluding volume of The Worldbreaker Saga, The Broken Heavens, will be released in October 2017.
Posted by Adam Whitehead at 20:19