Guardians of the Galaxy, Vol 2

Some months after their triumph over the renegade Kree warlord Ronan, the Guardians of the Galaxy have been hired by the Sovereign to defend their homeworld from a ravaging interdimensional monster. Unfortunately, Rocket manages to offend the Sovereign, leading to a sequence of improbable events culminating in Peter Quill finally meeting his father. Meanwhile, the Ravager faction led by Yondu has been outcast by their fellows for Yondu's dishonourable actions and he seeks to regain his honour in their eyes...which means tracking down and defeating the Guardians. 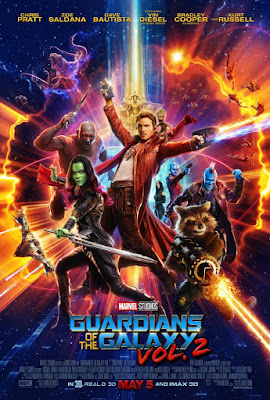 Guardians of the Galaxy is one of the Marvel Cinematic Universe's more laidback and fun movies. Free of the weighty continuity built up by the Earth-bound movies, it felt fresh and inventive. With a top soundtrack, some excellent humour and some great performances, it emerged as perhaps not the most dramatically satisfying Marvel movie, but certainly the most fun.

The second movie sees returning director James Gunn attempt a tricky balancing act of giving the audience more of the same - comedy, action, space battles, quips - and also doing something new that keeps the freshness of the first movie going. It can't quite stretch to do all of these things well and it stumbles a little more than its forebear, but it's still a brave attempt to do something more interesting than a by-the-numbers sequel.

The movie is certainly funnier. Baby Groot gets some great moments but it's Drax and new character Mantis, by themselves and as an unlikely double-act, who emerge with the best material. Yondu's Ravagers also get a bit more definition and the "tough"-sounding name of one of their number becomes a recurring gag throughout the movie. Chris Pratt employs his considerable comic talents better as well, such as his ongoing attempts to explain the dubious premises of mid-1980s action TV shows to his baffled compatriots.

More importantly, the film explores character better than the first movie. We find out why Peter doesn't just go home to Earth, more of what makes Gamora and Nebula tick, and more of what drives Yondu, who emerges as a more complex figure in this movie than the previous one. The film doesn't break new ground - the idea that the Guardians are a family and that's why they hang out even when they argue is hardly revelatory - but it does offer more food for thought about these people in the calm breaks between explosions.

The film does have a fair few explosions, and if the movie does have a weakness it is the protracted climax. The first movie had a long final battle, but that battle was divided into several strands with the goals, plans and motivations of everyone involved clear. The second movie's climax goes on too long, gets a little silly in places and risks being lost in concussive CGI overload. It's nowhere near as bad as, say, a Michael Bay Transformers film, but it does risk losing the audience's interest. Fortunately the climactic moment of the battle may also be the film's funniest moment, and the movie's actual ending is actually quite decent, if perhaps drawing a bit too deep on sentiment.

Remarkably, Guardians of the Galaxy, Vol. 2 does roll back a little on the scale from the first film. There's no Thanos, no Infinity Stones (although both rate mentions) and far fewer tie-ins with the rest of the Marvel Cinematic Universe than the original movie. Instead, Vol. 2 is more interested in setting up the rest of the Marvel Cosmic Universe. The first movie teased it, but the second film opens up on the wider SF stylings of the setting, with more character cameos from obscure 1970s Marvel Comics then you can shake a stick at. One revelatory moment will have old-skool Marvel fans grinning from ear to ear, especially if it leads into the spin-off movie Marvel reportedly are very interested in making, whilst the apparent revelation of the villain for Vol. 3 will have fans nodding in approval.

Guardians of the Galaxy, Vol. 2 (****) is a worthy successor to the original film. In trying to do more of the same and be different it perhaps bites off a little more than it can chew and the prolonged climax is messier and less interesting than the first movie's, but it wins those points back with more interesting character work, better laughs, yet more quotable dialogue, some great performances and another solid soundtrack (and the well-judged decision to do something different with setting up Vol. 3's). Oh, and it has maybe the most amusing credits Marvel has ever done (I mean the actual credits, not the mandatory during and post-credits sequences, which this movie goes overboard on).

The movie is on general release in the UK now and hits the USA on 5 May.
Posted by Adam Whitehead at 21:05