David Morrissey cast in THE CITY AND THE CITY adaptation

Veteran British actor David Morrissey will head the cast for the BBC's adaptation of the China Mieville novel The City and The City. Morrissey will be playing the role of Inspector Tyador Borlu, a police detective in the city of Beszel who gets caught up in a murder investigation. 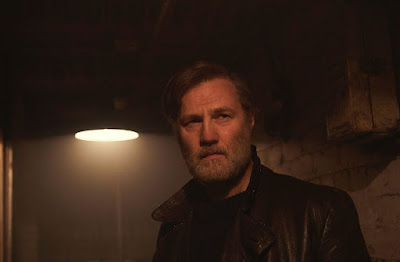 The City and The City is a cross-agency murder mystery with a twist: the twin cities of Beszel and Ul-Qoma coexist at the same point in space/time, with people, shops and buildings from the two cities jumbled alongside one another. People can transit from one city to another through special checkpoints, but any attempt to interfere in the operations of one city from the other results in a "Breach" with potentially catastrophic results.

It's a bizarre, dizzying concept to get across in prose and I'm curious how the BBC are going to handle it on screen. I've liked the idea of the "current" city being in colour and all the buildings, people and objects from the other city being in black and white, with it reversing when the characters cross over, but that might be a little too hokey (and expensive).

David Morrissey is one of Britain's best actors, first attracting notice for the 1992 mini-series Framed in which he starred with Timothy Dalton and Penelope Cruz. His subsequent roles included TV shows such as Our Mutual Friend and Sense and Sensibility. In 2008 he starred alongside David Tennant in a memorable Doctor Who Christmas special. More recently, of course, he attracted renewed fame and attention for his role as the Governor in the third and fourth seasons of The Walking Dead.

This is excellent news and raises interest for this already intriguing project. The City and The City is filming now and should air in 2018.
Posted by Adam Whitehead at 14:14

Email ThisBlogThis!Share to TwitterShare to FacebookShare to Pinterest
Labels: awesome, china mieville, david morrissey, news, the city and the city