1987. A dead body has been discovered on the outskirts of the town of Thimbleweed Park. FBI agents Angela Ray and Antonio Reyes lead the investigation and soon discover that there are some very weird things going on in the town. Meanwhile, Delores Edmund has been banished from her family home and fortune after abandoning the family pillow-manufacturing business to become a video games designer, but is summoned back to hear the reading of her uncle's will. And, in an abandoned fairground, Ransome the Insult Clown, dreams of escaping his fate and removing his clown makeup after he was cursed by a mysterious voodoo lady.

Thimbleweed Park is a throwback adventure game, employing the same SCUMM interface as the classic LucasArts video games of the late 1980s and early 1990s. The SCUMM system was created by Ron Gilbert, Gary Winnick and David Fox and employed in their game Maniac Mansion (1987). It would go on to be used in a further seven games in its original form. LucasArts would release another four games with a more streamlined (but less versatile) interface before ditching it in favour of a 3D engine with very awkward controls and more limited puzzle-solving. Bizarrely, Telltale Games (founded by ex-LucasArts veterans) would find great success with an even more limited engine (which almost removes all puzzles and inventory use altogether), leaving fans of real adventure games with relatively slim recent pickings. 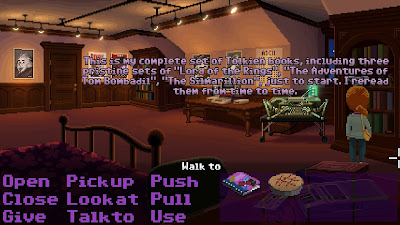 Until now, anyway. Gilbert, Winnick and Fox have reunited and created a new game using the SCUMM interface. In Thimbleweed Park you control five very different characters and have to direct them around the town, solving puzzles, picking up useful items and discussing matters with other characters. Early in the game your main focus is on solving the murder, but later on you also have to fulfil Delores' uncle's stipulations so the will can be read and then all five characters come together to try to break into a spooky factory and confront the darkest secrets of the town. 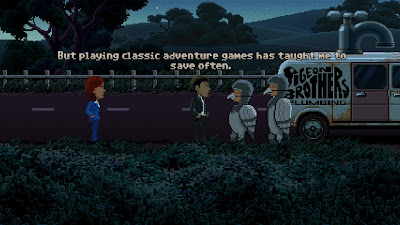 Like the LucasArts games, it is not possible to die and it is almost impossible to bring about a failed state where you cannot continue (and the one main way of doing that does have a warning that you should save the game first). As a result, playing Thimbleweed Park is a relatively relaxed affair as you move around the town trying to solve the game's various puzzles. The game mostly plays fair, with the solutions to the puzzles being mainly logical and straightforward (and of course walkthroughs are already available if you get really stuck). 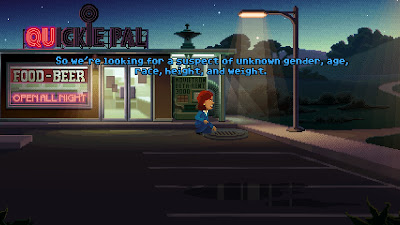 The game is funny, although it does strike a few bum notes, and the characters are reasonably interesting, especially Ransome the angry clown and Delores, the game's main protagonist. These characters are developed to the point where it feels like the designers lost interest in some of the other characters as development proceeded: Ray and Reyes have relatively limited character development in comparison. Overall, Thimbleweed Park nails the atmosphere, humour and strengths of the LucasArts adventures and improves on them in several areas, such as the addition of fast travel and a "run" ability to move around more quickly.

There are several negatives. The game has a large number of fourth-wall-breaking gags and metacommentary on old adventure games. This starts off entertaining but gets a bit old later on. I also can't help but feel that some of the humour and writing - such as the continued digs at Sierra adventure games when Sierra haven't made an adventure game in that style for over twenty years - is a tad dated and self-indulgent. As someone who's played almost every adventure game LucasArts put out and therefore gets all the gags, I found this vein of humour a little too forced. For younger players and newcomers I can imagine it could get quite alienating. It also doesn't help that a couple of puzzle solutions are dependent on foreknowledge of older LucasArts game (such as the old "Navigator's Head" trick from The Secret of Monkey Island). 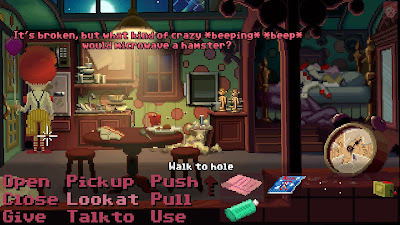 Another is a complaint I've had ever since playing Maniac Mansion way back in the day. These games, in my view, don't handle multiple characters very well. Your player-controlled characters don't speak or interact with one another very much (aside from swapping the occasional inventory item), and the puzzles sometimes involve telepathy which has no in-game explanation (one character doing something in one location to trigger an event another character can capitalise on elsewhere). It's also very fiddly to discover that three inventory items are needed to solve a puzzle and you have to manually gather the characters together to swap stuff around. It's not coincidental that the best-regarded LucasArts adventures, The Secret of Monkey Island and its sequel, feature only one controllable character and only one inventory to manage.

Still, Thimbleweed Park (****) is resolutely entertaining. The pixel art is gorgeous, the music is limited but excellent, the voice acting is pretty decent (and can be turned off if you really want to pretend this 1990 again) and the writing is mostly sharp (if occasionally self-indulgent). It's not as good nor as funny as the Monkey Island titles (Tim Schafer's absurdist streak is sorely missed), not as enormous and compelling as Indiana Jones and the Fate of Atlantis, but stacks up well compared to Maniac Mansion and Zak McKraken, and is far less obtuse and stonewalling as those games could be. The game is available now on PC, Mac and X-Box One, with a PlayStation 4 version to follow shortly.
Posted by Adam Whitehead at 15:37

I do not agree at all, and of course it's just a matter of opinions, that the best Lucas adventures feature only one playable character: Day of the Tentacle have three, and it's a masterpiece in every possible sense also because of that.

As for the navigator's head, it is not strictly necessary to solve 'that' puzzle; I picked it up but reached the designed destination following one of those passers-by after combining other items from the inventory and using the combined item where it is needed [hopefully no spoilers there :) ].