Italy, 1943. The Allies, having captured the island of Sicily, are preparing the invasion of the Italian mainland. SOE agent Karl Fairburne is sent undercover into Italy to work with local partisans to eliminate key German forces ahead of the invasion. In the process, he learns of a new German missile programme which could spell disaster for the invasion, and races to sabotage it. 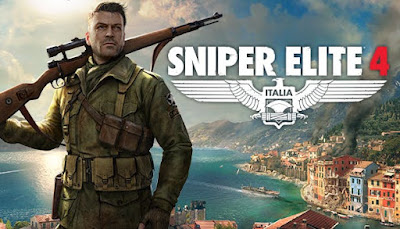 Sniper Elite 4 is, as subtly indicated by the title, the fourth game in Rebellion Studios' Sniper Elite series, although chronologically the second (Sniper Elite V2, a remake of the first game in the series, is set in Berlin in 1945; Sniper Elite III is set in North Africa in 1942). The game stands completely alone with its own storyline, so prior familiarity with the series is not required.

As the title also hints, the game casts the player as an SOE (Special Operations Executive) sniper, tasked with completing various mission objectives. Calling Fairburne a sniper is somewhat limited, as he is also adept in close-quarters combat with knife or pistol and can fend off larger numbers of enemies with a submachine gun. He is more of an all-purpose commando whose first weapon of preference may be the sniper rifle but is also capable of using any means necessary to get the job done.

The game unfolds over eight missions, each one of which takes place on a separate, quite large map. Fairburne can usually spend some time studying mission objectives and talking to special planners before the operation begins, unlocking secondary objectives at the same time. Once the mission begins Fairburne is usually alone against a very large number of enemy soldiers, although on a couple of missions he does have support and help from partisans, and can call in air strikes to help with some objectives. 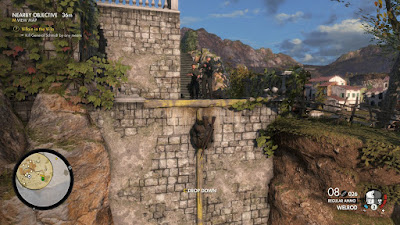 Sniper Elite 4 is an action game that borrows elements from much more realistic tactical games, and its difficulty levels can be set to provide wildly varying experiences. On the most difficult settings, weapons are affected by realistic physics with all player aids (like the special target showing the drop-off of sniper bullets over long distancse) turned off. On the easiest settings, the game is much more forgiving and gives you a lot more health and dumbs down the enemy AI.

The game is a solid, enjoyable tactical shooter and it's refreshing to play a game that borrows liberally from open-world game whilst retaining a core focus on what you're supposed to be doing, which is combat. It reminded me very much of the first two (and arguably still the best) Far Cry games, which had open-ish worlds but made sure you stayed on track with your objectives, unlike the later ones which threw increasingly absurd distractions at you.

That said, Sniper Elite 4 does have a slightly odd feel to it. The game feels like a stealth title: Fairburne is not indestructible and is often alone far behind enemy lines, so in many cases it feels like you should be ghosting into enemy bases, achieving objectives, assassinating enemy generals etc and then leaving without a trace. With some of the missions you can get quite far pursuing a stealth option, with knife takedowns and silenced pistols helping ease your way to the target. However, you also learn early on that this is unnecessary. The AI divides each map into several discrete zones, with the enemies in each zone operating separately to the next. This sometimes sees you loudly sniping, machine-gunning and grenading your way through one zone whilst the enemies a few hundred feet away in the next are seemingly oblivious to your presence. Even if you do cause enough chaos to alert the entire map, the enemy don't think to destroy documents or evacuate the high-value general. Causing mayhem is often more fun and far faster than stealthily creeping around the map.

Sniping is the most fun part of the game, with you having to find the best locations to shoot from, identifying key enemies using binoculars to mark enemy targets before trying to take them down, and then firing. If you spend too long in one firing spot the enemy can triangulate your position and even call in air strikes on your head, forcing you to relocate regularly. Sniper duels with enemy snipers can be quite a lot of fun. You can also cheese the AI: if the enemy triangulate your position they'll send everyone in the zone after you, which allows you to set up traps and kills zones where you pick off the enemy piecemeal, often clearing vast sectors of the map of enemies in one go.

More formidable enemies like tanks and APCs can complicate matters, although there's some nice options for taking them down: you can snipe the gunner and driver of a tank via their view ports and then use explosives to destroy the immobilised vehicle. It's a high-risk strategy though, and where possible avoiding them is a better idea.

The shooting and action in Sniper Elite 4 (****) is great, the AI is generally impressive although easy to hoodwink and the level design is pretty robust. The story is completely forgettable and the characters - including chisel-jawed, wood-headed Fairburne - are cliches, but the setting is graphically attractive with some superb sound design. At 12 hours or so in length, the game is slight enough to warrant holding out for a sale, but generally speaking this is an entertaining slice of WWII shooting which requires a bit more thought than your average action game. It is available now on PC, PlayStation 4 and X-Box One.
Posted by Adam Whitehead at 21:30