Wertzone Classics: The Curse of Chalion by Lois McMaster Bujold

Lupe dy Cazaril is a former soldier in the army of Chalion. Taken prisoner after a siege, he has been sold into bondage, made a galley-slave and been rescued. Returning to his old home of Valenda, he seeks service with the Provincara dy Baocia. He is made tutor to Iselle, the sister of the heir to the kingdom, a position initially without power or influence. When Iselle and her brother are summoned to the royal court by their brother, the ailing king, Cazaril finds himself in a political nest of vipers, pitted against an old enemy who is very unhappy to see that he has survived, and a curse that may be beyond his abilities to thwart. 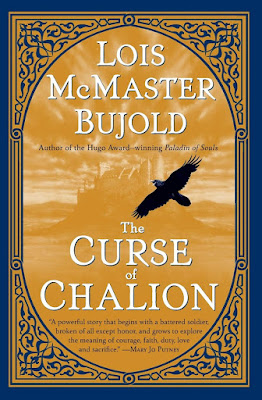 What happens when your life is taken from you and you are left abused, beaten and broken, and then abruptly returned to your former life?

The Curse of Chalion is a novel about trauma, about a man who has faced serious degradation and danger but lived to tell of it, and afterwards has to find his way back to something approaching normalcy. Unfortunately, whilst this is going on his country is under threat from external enemies and also from internal strife.

This is a fascinating novel, one that at first glance bears resemblances to Guy Gavriel Kay's classic The Lions of Al-Rassan (particularly the very strong Spanish inspiration) and to George R.R. Martin's A Game of Thrones, particularly the political manoeuvrings within the royal court which start with mild barbed words but soon escalate to intimidation, murder and the threat of civil war. There's also a similarity to Robin Hobb's work, particularly the tight focus on a single character and its exploration of trauma and recovery. But it's also very much a Lois McMaster Bujold novel. Those who have sampled her other work, such as the long-running SF Vorkosigan Saga, will find similarities in the exploration of relationships, tragedy and redemption, although it is written in a different style.

The book lives and dies by the characterisation of Cazaril, the main protagonist. Although the book is not written in the first person, we spend the entire novel perched on Cazaril's shoulder to the point where it might as well be. Cazaril is a broken man, damaged goods, who tries to piece his life back together by retreating to his childhood home and station as a page to the royal family of Chalion but finds that his gifts and experience elevate him to a new position as a teacher and mentor to the younger members of the family. Cazaril is a refreshing fantasy protagonist; he is not a badass, sword-wielding prodigy or a reluctant youngster nevertheless gifted with vast sorcerous powers, but a middle-aged man who comes into situations he has little control over and has to find a way of negotiating his way through them, for good or ill.

The secondary cast is a well-drawn and varied lot, and the worldbuilding is impeccable. There's an interesting way of handling magic and the religion and politics of Chalion are drawn in some detail. Bujold's prose, honed at this point by twenty years of experience, is also excellent, evocative without being overwrought and a genuine pleasure to read.

The Curse of Chalion (*****) is a compelling, richly-detailed fantasy novel with superb, multifaceted characters and a strong sense of direction and purpose. It may just be Bujold's finest novel to date, in an exceptional career. It is available now in the UK and USA. It has a sequel, Paladin of Souls, and a prequel, The Hallowed Hunt.
Posted by Adam Whitehead at 12:20

Email ThisBlogThis!Share to TwitterShare to FacebookShare to Pinterest
Labels: lois mcmaster bujold, the curse of chalion, wertzone classics, world of the five gods

While Paladin of Souls is also a very good novel, I think it only got the Hugo because Curse of Chalion didn't get it. It would have deserved his honor even more.