LIFE ON MARS revival mini-series in the planning stages

Matthew Graham, the co-creator and co-writer of the time-travelling metaphysical police drama Life on Mars and its sequel series Ashes to Ashes, has confirmed that he is developing a mini-series revival of the franchise. 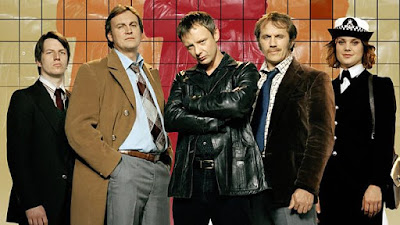 Life on Mars starred John Simm as Detective Sam Tyler of the Greater Manchester Police. He is hit by a car and goes into a coma, but when he wakes up it's 1973 and he is working for a considerably less professional, more sexist police force under the leadership of DCI Gene Hunt (Philip Glenister). Tyler has to solve crimes whilst navigating culture-clash issues, avoiding altering his own past and finding out what has really happened to him and if he can return to his own time.

The show aired two seasons in 2006 and 2007 and was both a critical and commercial success (an American remake starring Harvey Keitel was less accomplished, and axed after a single season). Simm declined to return for a third season, so the concept was rejigged as Ashes to Ashes. A new police officer, Alex Drake, who is obsessed with the strange story of Sam Tyler, finds herself in London in 1981, working for Gene Hunt who has moved down south to help combat a deadly crime wave in the capital. Ashes to Ashes ran for three seasons from 2008 to 2010 and ended on a surprisingly definitive note which fully explained the strangeness and seemed to close the door on any further adventures in this world, although Glenister did reveal that a 1950s or 1960s-set prequel series focusing on a young Gene Hunt had been discussed as a joke, with the title The Laughing Gnome (all of the show titles come from contemporary David Bowie song).

Although Ashes to Ashes was well-received, fans were disappointed that it did not reveal the fate of Sam Tyler and other key characters on-screen, instead relaying news of their fates in dialogue.

Life on Mars: The Final Chapter (working title) will be partially set in the 1970s, partially in the 1980s and mostly in an "alternate now." The series will also involve a TV show-within-a-show called "Tyler: Murder Division." Provisionally, Philip Glenister and John Simm have agreed to return and the writers want to bring back as many characters from both series as possible.

The producers actually let slip the news in a tweet on 30 March, and have confirmed that the news is not an April Fool's (which, in the UK at least, ends at midday anyway). The timescale for the new series will, of course, depend on when the current pandemic crisis eases.
Posted by Adam Whitehead at 23:35