The Genesis Device: a machine of capable of terraforming a lifeless body into a terrestrial planet within hours. But it also has the potential to be used as a terrible weapon. The USS Reliant is assigned to help the Genesis science team find a planet to test the device, but inadvertently stumbles across the exiled home of genetically-engineered tyrant Khan Noonian Singh and the crew of the sleeper ship SS Botany Bay. Khan seizes control of the Reliant and develops a plan with two objectives: the capture of the Genesis Device, and the death of the man who sent him into exile for fifteen years, Admiral James T. Kirk. 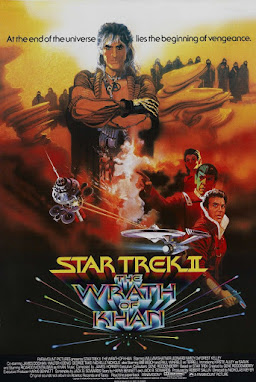 Respectfully, I disagree. In the interest of space (and time), I'll just share this: https://stevenlylejordan.blog/2012/06/08/the-wrath-of-khan-sucked-yes-it-did/

It largely sums up my issues with the film.

Oddly enough, I watched this for the first time in perhaps 20+ years the other week. There were a couple of things that aged badly; the whole "let a woman take a starship out of space dock, are they mad?" moment with Kirk and McCoy, and Alley's character being uptight in a way that has nothing to do with her Vulcan heritage and everything to do with her being a woman. Still, other than that, it was pretty darn good.

Most of the "criticisms" offered of TWoK in that article are dubious, at best:

"Fast-forward about 25 years, to a movie that depicts the Enterprise being used as a training vessel (yeah… for the most celebrated ship in the Federation fleet, and recently refit to-boot, that makes sense)" - The Wrath of Khan takes place 14 years after The Motion Picture (a necessary dodge to account for the cast's aging, despite TMP being said to take place only 18 months after the end of the 5-year-mission). The refit Enterprise has gone from being the hottest thing in Starfleet to a ship that's almost ready for decommissioning (as indicated in the following movie), so yes, it makes sense it's being used for training missions.

The Ceti Alpha V/VI mixup is odd, but explained by the inferior tech of the era. In TNG, the Enterprise-D can scan an entire system the second it arrives; in TOS and the movies the Enterprise usually has to be much closer to undertake such scans. The Ceti Alpha system has been charted before (just not in the last 15 years, obviously) so the Reliant had no reason for a full system standby. They just headed to the orbit of Ceti Alpha VI. This does mean that the explosion of Ceti Alpha VI causes Ceti Alpha V to move out to the orbit of Ceti Alpha VI, which seems ridiculous but bizarrely has some backing in recent planet formation discoveries (particularly the discovery that gas giants migrate to closer orbits unless they are pulled back by the presence of other planets in the outer reaches of the star system). This takes a bit of a swallow, and would have been improved by transposing VI for IV.

"Saavik has her part Romulan heritage left on the cutting room floor (yeah, didn’t know she was supposed to be half-Romulan… did ya?)" - Everyone knows this (it was in the novel and it's in the movie's Wikipedia article) but it's also irrelevant. Apart from making McCoy's Romulan Ale joke in the turbolift a bit of a non-sequitur and maybe explaining Saavik's slightly more emotional behaviour, it has no bearing on the rest of the film.

"Characters like Scotty’s nephew become nameless footnotes, lessening the impact of their later death scenes and wasting perfectly good pathos" - Both of the film's two re-releases add more characterisation to Scotty's nephew (the first adds his name, the second gives him a scene in the engine room with Kirk and his familial relationship to Scotty).

"Chekov and Terrell can’t just beam out of Khan’s world before Khan’s guys can cross a few dozen yards of sand to catch them;" - We don't see how Chekov and Terrell were captured because it happens offscreen. It may be that the Botany Bay or Khan's followers (who were left some survival equipment in Space Seed) still had the ability to jam their communications.

"Khan “remembers” Chekov, despite the fact that they never met in the original Trek episode;" - Explained (repeatedly) in various interviews and other material that Chekov was serving belowdecks on the Enterprise in Season 1 as a junior officer and met Khan offscreen during the original episode. Slightly cheesy retcon? Yes. But certainly not impossible, either.

"Khan, the man of “superior intellect,” apparently responded to the loss of his wife and the change in his planet by going insane with thoughts of revenge on Kirk… but none of his “superior” followers, including his son, have the stones to explain his obsession to him, or take steps to prevent their all being destroyed by the man;" - Khan's son, Joachim, remonstrates with Khan repeatedly about his obsession and going after Kirk.

"“Superior intellect” Khan on the Reliant could have had earworm-controlled Captain Terrell greet Enterprise and bring them within transporter range; whereupon Khan could have beamed over with his crew, taken over a superior starship and killed Kirk and crew personally. Instead, he pulls a sneak attack with a science vessel against a heavy cruiser, which he doesn’t know isn’t staffed by a shipful of professionals." - Khan's followers number maybe 15-20 people in total. Enough, with Chekov and Terrell's help, to take over the Reliant (with a much smaller crew), but not enough to realistically challenge Enterprise's crew of over 450, even if a large number of them are inexperienced. Enterprise being on a training cruise might be noted in normal Starfleet communications, which Reliant would have access to.

"We discover Kirk had fathered a son and never met him, nor kept in touch with him or his mother… and we’re supposed to actually care;" - Agreed, David's presence is something of a non sequitur given it's not really built upon, but it does feed into Kirk's fear of aging. However, it does play a larger role in the following film.

"The scientists are smart enough to hide the Genesis device on what appears to be a lifeless moon. The scientists then demonstrate they are not smart enough to hide with the device." - They do hide with the device. However, several of the scientists remain behind to cover the escape of the others. There is an actual slight plot hole here: the scientists who stayed behind should have deactivated the transporter console to stop Khan following Carol and David, as Saavik indicates was a possibility. However, not an egregious one.

"One of the worms Khan dropped in Chekov’s ear could have been dropped into the ear of just one of the scientists in order to find the genesis device, preventing the need to torture the rest of them;" = The earworms killed Khan's wife, so I suspect he was not particularly minded to bring them along. They may have also only had the one female and once she produced grubs, it might have been some weeks or months (or years) before she could do so again, and Khan didn't want to waste time searching for more of them in the desert. To be honest, the grubs are enough of a DEM that we don't really need them taking over the whole movie.

"a nebula is depicted like a technicolor fog bank a few miles wide," - at one point in the battle Spock notes that the Reliant is doing an impulse turn, indicating that Enterprise and Reliant can pick up each other's wakes in the cloud formations even with compromised sensors. They just can't reliably scan one another. So they can stay in touch with one another but not much more than that.

"Star Trek: Generations is probably the best, in my opinion; followed by Star Trek: Insurrection" - at this point we should consider the possibility that the writer in question is taking the mick and indulging in a bit of a provocative hot take.