A group of researchers and scientists at the civilian research facility Regula I have created an amazing piece of technology, the Genesis Device. This device can instantly terraform any lifeless world into a terrestrial, habitable one in a matter of hours. The Federation has sponsored the development of this device, assigning the USS Reliant to assist the team in locating a dead planet to use in the initial testing. The Reliant's survey of Ceti Alpha VI runs into problems when Khan Noonian Singh, arch-enemy of James T. Kirk, is unexpectedly encountered on the planet. Soon, the Reliant is under his control and he is on his way to Regula I to take control of the Genesis Device and turn it into the ultimate weapon... 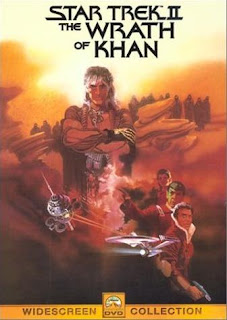 Meanwhile, the USS Enterprise under Captain Spock is on a training mission with a fresh crew of cadets. Admiral Kirk is on board to oversee the training cruise. When a garbled distress call is received from Regula I, Kirk assumes command and is soon forced into a desperate battle against Khan and the Reliant.

The Wrath of Khan has the reputation of being not just the best Star Trek movie, but also one of the best SF movies of its age. Unfortunately, in recent years it has perhaps become better known for the numerous parodies of a certain seminal William Shatner moment roughly halfway through the film, although in-context it works a lot better.

There are several factors which combine to make The Wrath of Khan such a good movie. First off, it has an extremely well-drawn villain played by a good actor. Khan having previously appeared in the classic Star Trek series (in the first season episode Space Seed) gave him a decent backstory and rationale for wanting vengeance against Kirk without getting bogged down in continuity. It was many years after I first saw the movie as a kid before I saw the episode, and really all you need to know is that Kirk dumped Khan on a planet as a gesture of supposed mercy which ended up killing Khan's wife and several of his shipmates. Ricardo Montalban plays Khan with a certain theatrical malevolence which treads a razor's edge between high camp and genuine evil. He also gets some ripe lines which he manages to dignify through totally believing in them. Seriously, who else could pull off, "Revenge is a dish best served cold, and it is very cold...in space"?

The second factor is that the script plays to the strengths of the individual actors and gives most of the Enterprise crew their own stories to follow (although Nichelle Nichols' Uhura and George Takei's Sulu are not as well-served as others) . Chekov, notably under-used in the actual series, turns up as the first officer of the Reliant who is captured by Khan early on and eventually ends up back on the Enterprise. There is an interesting and tragic subplot for Scotty, who gets his nephew a job as a trainee in the Enterprise's engineering department, whilst McCoy spends most of the movie trying to pull Kirk out of his brooding depression at turning 49. There's also the new character of Saavik, Spock's protege who is angling for her own command. Effectively played by Kirstie Alley, Saavik serves as a viewpoint character for those viewers unfamiliar with the series. Oddly, a line referencing the fact that Saavik is actually half-Romulan, half-Vulcan was cut from the movie (and not restored in any one of the half-dozen or so different cuts and edits of the movie released over the years), whilst a later joke by McCoy referring to this fact is left in, somewhat confusingly. Spock only seems to have a minor subplot at the start referring to Kirk's guilt when he takes command of the ship from him, only to disappear in the middle third of the movie whilst Kirk, Saavik and McCoy travel to Regula. Of course, this was only to set up the unexpected ending (more on which in a moment).

The movie was also made on a crushingly small budget of $8 million (later raised to $11 after positive studio reaction to dailies), less than one-quarter of that assigned to its forebear, Star Trek: The Motion Picture. The producers, director and special effects crew had to work with their backs to the wall with only a limited number of sets, miniatures and effects shot available. Some shots from the preceding movie were re-used, whilst two-thirds of the movie took place on the same set, the Enterprise bridge which was redressed to serve as as the bridge of the Reliant. This saved enough money so that the final, iconic battle sequence - the Enterprise and Reliant playing cat-and-mouse in the Mutara Nebula - could be rendered as impressively as possible. The battle scenes in the movie are also superb, with the ships acting less like oversized fighters (a common complaint levelled against later movies and TV episodes) and more like the lumbering battleships they're supposed to be, dishing out and taking enormous amounts of punishment. The battle is also tremendously visceral, with decks collapsing and crewmen getting crushed, burned or subjected to lethal radiation in a manner that hadn't been seen previously on Trek (and led to the movie getting a hitherto unthinkable '15' certificate in the UK). Additionally, there's a small piece of history in the movie in the Genesis Device training movie, which is the first-ever 100% computer-generated sequence in the history of film (or so it is claimed anyway).

Particularly worthy of mention is James Horner's score, which re-uses a few elements from his earlier movies (particularly Battle for the Planets) but mostly consists of new material. His new overture, used for flybys of the Enterprise and the main title theme, is instantly classic.

Of course, what really got people talking when the movie was released was the jaw-dropping ending, which in the pre-Internet age had successfully been kept secret in a manner unlikely to be replicated today. It's still an emotionally powerful moment played by the actors in a convincing and almost poetic manner (the oft-mocked Shatner is on top form throughout this movie and its sequel). In fact, despite the sometimes hokey dialogue as related above, the movie has a number of iconic lines and quotes (mostly from A Tale of Two Cities and Moby Dick) which help give the movie a thematically satisfying through-line. This is a movie about not just revenge, but age, finding your right place in the world and the fact that the needs of the many outweigh the needs of the few (or indeed, the one). There's also satisfying attention paid to not copping out on the story. The writers couldn't conceive of a way that Khan and Kirk could meet without Kirk being killed, so they simply don't meet. And whilst victory is eventually won, it is only at a hard cost.

Star Trek II: The Wrath of Khan (*****) is a great film because it doesn't go overboard on the gimmicks or macguffins (the Genesis Device - which doesn't really do much - aside) and simply has two enemies on two equally-matched ships slugging it out and one winning through the use of his wits. With strong thematic underpinnings, endlessly quotable dialogue, a score to die for, great effects and some solid acting, the movie overcomes a few cheesy lines, a couple of continuity gaffes (Chekov never met Khan in Space Seed and didn't appear until the following season) and some 80s hairstyles to retain its place as not just the best Star Trek movie, but an entertaining and breathlessly exciting SF movie in its own right.

The movie has just been reissued on DVD in the UK and also released for the first time on Blu-Ray. In the USA the movie is only currently available as part of a boxed set also featuring the other five original-cast movies, on Blu-Ray (UK, USA). Oddly, this collection is not available on DVD in the USA, with only a 'trilogy collection' containing the second, third and fourth movies available, whilst the full box set is available on DVD in the UK. Exactly why Paramount have done this, or not included any of the excellent special features from the 2002 DVD release, I have no idea.
Posted by Adam Whitehead at 21:42

Great movie! I've been meaning to pick up a copy since watching the new flick put me in the mood for more Star Trek.