Steve Brickman, former Skyhawk pilot turned AMEXICO secret agent, is out of his depth. His mission to capture Mr. Snow, Cadillac and Clearwater, the three M'Call Mutes whose powers pose a direct threat to the Amtrak Federation's expansion, has been complicated by the fact that Cadillac and Clearwater have been sent as envoys to Ne-Issan, the homeland of the mysterious Iron Masters. With little choice, Brickman is forced to follow and soon learns that Cadillac is posing as a Tracker wingman, using the knowledge and information he stole from Brickman's own mind to construct an air force for the Iron Masters. 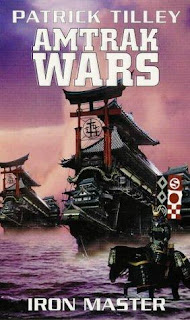 Meanwhile, in Ne-Issan the Shogun is concerned over the ambitions of the powerful Yama-Shita family, who already control the lucrative Great Lakes trading routes into the Mute heartlands and now seem to be organising themselves for an attempt to displace him from power by sponsoring the air force project. His top agent, Herald of the Inner Court Toshiro Hase-Gawa, is dispatched to sabotage the aircraft production facility by any means necessary, and soon finds an unlikely ally in the shape of Steve Brickman...

If Cloud Warrior was an exploration of the culture of the Mutes and First Family looked more closely at the inner workings and government of the Federation, Iron Master turns its attention to the society of Ne-Issan. For reasons that Tilley doesn't entirely explain, vast numbers of East Asian refugees from the War of a Thousand Suns somehow reached the former Eastern Seaboard of the United States and set up a feudal society based heavily on Shogunate-era Japan, running from Nova Scotia to South Carolina. The society they have built is undeniably well-drawn and fascinating, but it seems a bit odd that refugees from Asia would end up on the Atlantic coast of America and not, say, in the Washington-Oregon-California area.

Anyway, ignoring that geographic oddity, Iron Master is the best of the first three books in the series. Tilley's grasp of political intrigue and his appetite for plans-within-plans and multiple layers of deception reaches its full flower here, as Brickman pursues his agenda, Hase-Gawa pursues his, the Shogun's wily chancellor pursues yet another and AMEXICO do their bit to add to the confusion as well. It's a complex and at times confusing story, but Tilley's clear prose, relentless pace and gift for action sequences keeps events ticking along nicely. Characterisation is strong, with Brickman's evolution to a full-blown double agent continuing in an intriguing manner and Hase-Gawa making for an effective supporting character (his true motivations are held back for the last few pages of the book and make for a nice twist). Unfortunately, Clearwater, despite being one of the central figures in the series, remains a bit bland and distant as a character.

Iron Master (****) is a strong and compulsive read and is a solid continuation of the series. Again, it is no longer in print but second-hand copies are available in the UK and USA.
Posted by Adam Whitehead at 20:34