The epic Battle of the Trading Post and the bloody Battle of Twin Forks have changed the political balance of power in post-apocalypse North America. The Plainfolk are now determined to work together to prepare for the coming of their messiah, the Talisman, whilst the Iron Masters are wracked by internal disputes. Aware that the Iron Masters will not simply accept the loss of so many of their troops in recent battles, Cadillac and Roz decide to travel into Ne-Issan to secure peace and encourage the beginnings of a new civil conflict within the country. Meanwhile, Steve's attempts to keep a foot in both the Plainfolk and Federation camps continue as his star rises and he is made a member of the ruling First Family. But the higher he climbs, the greater the distance to fall... 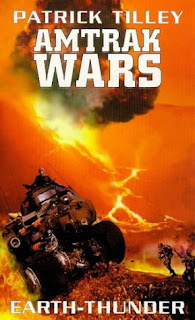 When the captive Clearwater goes into labour at the precise moment Mount Saint Helens explodes with tremendous force, the First Family realises the Talisman Prophecy's fulfilment is at hand and the future of their war to take control of the surface world is about to be decided.

Earth-Thunder is the sixth and concluding volume of The Amtrak Wars. Patrick Tilley envisaged a twelve-volume epic divided into two sub-series spanning decades of history. However, after completing the sixth book he felt burnt-out and wanted to take a break. Life seems to have gotten in the way, and he has not released a new book since, despite occasional rumblings that a seventh book, called Ghost Rider, would appear. Whilst regrettable, it does mean that The Amtrak Wars has, for an SF/fantasy series, a surprisingly dark and grim ending (although not completely shorn of hope) which avoids cliche.

There's a nice reversal of roles in this book as Roz joins Cadillac on the surface and Steve has to return to the Federation, where he scales the ladder of promotion and success and has to navigate between different factions within the First Family with different visions of how the Federation is to move forwards. Whilst an interesting diversion it's not entirely successful. Part of the fun of the series is seeing Steve on the front line surviving by his wits. Having him back at base trying to learn Japanese and getting dubious offers from conflicting factions in the government is less compelling. This is made up for by Roz and Cadillac's journey into Ne-Issan, playing off the factions against one another in a morally dubious story of murder, skulduggery and intrigue. It's good stuff.

Where the novel succeeds is the final part of the book. With the series coming to an end Tilley - hardly a squeamish author at the best of times - has no problem with gunning down major characters and a real sense of the story spinning out of control comes to the fore, culminating in a surprising climax. There is then an epilogue (unless you have the 1998 edition, which removed it) which clarifies some of the events which took place in the two years following the end of the series which does give a much better sense of conclusion and finality to the story. Perhaps not ideal, but certainly better than getting no answers at all.

Earth-Thunder (***½) brings The Amtrak Wars to a reasonable, if surprisingly bleak, conclusion. Second-hand copies of the book are available via Amazon.co.uk but not on Amazon.com (not for less than $40 anyway).
Posted by Adam Whitehead at 21:36