Several months after the events of the Firefly TV series, the Alliance loses its patience with the repeated failure of its military forces to locate Simon and River Tam, and dispatch an Operative of the Parliament to carry out the mission. The Operative is a skilled, exceptionally smart and incredibly ruthless individual with no morality and no allusions about himself or the job that needs to be done. He discovers that Simon and River are on board the Serenity and uses every resource at his disposal to capture them, whilst Captain Malcolm Reynolds and his crew do everything in their power to stop him. In the crossfire, the Alliance's darkest secret is exposed and Mal discovers he has a chance to really hurt his wartime enemies, a chance he doesn't intend to miss out on. 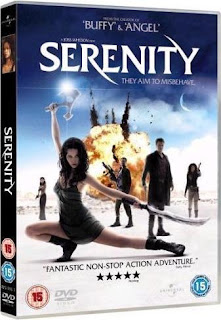 In 2002 Joss Whedon created a new science fiction TV series, Firefly. It was critically-acclaimed, but the studio messed around with it, putting the episodes out in the wrong order and their advertising and marketing for the series wasn't the best. It floundered and the network, panicking at the impressive budget for each episode, cancelled it after just fourteen episodes. In the normal course of things, that would be that.

Except it wasn't. The DVD box set was a huge seller almost from the word go. Foreign broadcasters were enthusiastic, and the show picked up some strong audiences overseas and in re-runs, particularly on various iterations of the Sci-Fi Channel. A strong and devoted fanbase, dubbing themselves 'Browncoats' after a military force in the TV series, kept the fire burning and spread the word. When Universal Studios expressed an interest in working with Joss Whedon on an original, relatively low-budget movie, he suggested doing a Firefly movie. They agreed to go for it, and Serenity, named after the ship in the TV series, was the result. Made on a budget of $30 million, it was released in 2005 and was a very modest success, not enough to get a sequel but enough to make its money back (especially when combined with its strong DVD sales) and win some acclaim. More importantly to the Firefly fanbase, it provides the story and the series with a sense of closure altogether missing from the TV series' finale.

That said, the movie has a number of problems stemming from its highly anomalous position as a movie that needs to attract the widest possible audience whilst at the same time being spun off from a pretty obscure TV show, and not only that but also a movie involved with closing off not just large story threads but also some minor ones from the show as well (such as the oft-thwarted Kaylee/Simon romance, Shepherd Book's background, Inara's conflict of interest issues between her job and her feelings for Mal etc). The result is a movie that is undeniably entertaining and fun, but also falls down between the two stools on occasion.

Serenity gets a lot of things right. The actors slip back into their roles effortlessly and Nathan Fillion in particular makes a strong big-screen impression. On the newcomer front, up-and-comer Chiwetel Ejiofor plays the Operative, a particularly interesting and nuanced villain with an unusual level of self-awareness. The special effects are considerably more spectacular, as you might expect, and the action set-pieces much more impressive. However, the set for Serenity itself doesn't feel quite right. In fact, it looks less impressive in the movie than it does on TV (despite a brilliant opening tracking shot that takes in the whole interior of the ship in one go), particularly the main hanger bay. Considering they had more money to spend on the movie set than on the TV one (they had to rebuild it from scratch), this is a bit weird.

However, the biggest issue is with the writing. Not the individual scenes, which are often very strong with Whedon's trademark clever references and wordplay, but more the aforementioned conflict between having to service newcomers to the series and franchise, and also tell a story that is interesting to the established fans and resolves plot threads left dangling from the series. There are some clever ideas to achieve this, such as opening with River's escape from the institution and then jumping forwards past the events of the TV show to the 'present', but they are outstretched by a lot of clunky expositionary dialogue. There is no reason why Mal would suddenly start referencing events from eight months ago to Simon (who already knows all about what he is saying), and even non-fans of the show (such as myself at the time the film came out) can pick up on this stuff not quite feeling right. At the same time, other elements are dropped in with no explanation, like who Inara is. When the Operative shows up on her planet the new viewer is left nonplussed until Kaylee fills us in (via a video diary) a few scenes later.

For fans of the show, there are also a lot of discontinuities. Minor stuff like River's escape not quite adding up with Simon's account in the series can be dismissed as as dramatic/cinematic conceit, but Jayne's sudden return to belligerently opposing their presence on the ship seems to undo the well-charted, changing relationship between the three of them over the course of the first season. Whedon tries to make this work by playing up the 'revelation' of River's true capabilities, but considering we were seeing these starting to emerge in the show and Jayne seemed to have no major issues with them at that time (especially after she saved everyone's ass in Objects in Space), it seems a bit odd.

These 'issues' (and their mileage will vary per fan and viewer) are mostly constrained to the first third or so of the movie. Once Whedon starts kicking over the apple carts and moving the story forward, the pace picks up relentlessly, the action kicks in and he falls into his more natural, flowing dialogue rhythm which is always fun to follow. He also enjoys kicking fun at movie conventions, such as Mal shooting an unarmed man who tries to appeal to his sense of honour, and in the climatic moments of the film major characters get hurt and even die. Whedon even fixes an unintended problem with the original series - that they never got round to having a Zoe-centric episode - by giving Zoe some good lines and evolving her role as Mal's friend a bit more and giving her an emotionally powerful final act in the film.

Serenity (****) works as both a solid SF movie for someone who's never watched Firefly, and a reasonable conclusion to the series for the fans (though carefully leaving doors open for the story to be picked up again in the future). When it tries to do both simultaneously it falters, but once it gets over that it becomes involving and entertaining. The movie is available on DVD (UK, USA) and Blu-Ray (UK, USA).

Unfortunately, barring future miracles it looks like this really was the end for Firefly. Whedon went on to make Dollhouse, whilst Firefly's cast moved on to many different projects (Summer Glau most recently in Terminator: The Sarah Connor Chronicles, whilst Morena Baccarin is appearing in the V remake). It wasn't a bad note to bow out on.
Posted by Adam Whitehead at 00:08

I never got that the escape scene in the beginning was supposed to be set in the past or whatever. It always confused me and led me to just assume that the movie was kind of an alternate telling of the story.
Thanks for clearing that up for me, but I'm still not sure what I missed that would have clued me in.

Also, I was sad to see the two "Hands of Blue" baddies didn't make it into the movie, as I always wanted to see a resolution to that.

And my uncle Jeff played the taller and more creepy of the two in Firefly. He was on Buffy and Angel a few times, as well.

The hands of blue storyline was resolved in the graphic novel that linked the TV series and the movie. IIRC, the blue guys caught up with the Serenity and were killed by Mal and co. Their failure was what prompted the Alliance to send in the Operative (or so I understand, not having read it).

I loved the series and loved the film and am completely besotted with both.

Couple of things for me: I thought Edmonson's TV scoring was more evocative than Newman's, still excellent, film score. I also had problems with the lighting as everything felt a bit cold. There was a certain warmth to the lighting in the series that, in my opinion, just didn't translate to the film.

Ejiofor was great in this film and a pitch perfect casting. If you liked him hear I highly recommend you check out Mamet's Redbelt for some more Ejiofor awesomeness.

The lighting comment is pretty interesting, and probably feeds into the set issue. Serenity herself felt very grey in the movie, whilst in the series is was a warmer, more colourful environment.