The Revelation Space books by chronology

With the news circulating about Alastair Reynolds' major new publishing deal, I've noticed that there's been a fair bit of interest circulating on forums by people who haven't tried reading him before and want to know where to start.

For the stand-alones, it's pretty straightforward. The novels Century Rain, Pushing Ice, House of Suns and the forthcoming Terminal World are all set in their own universes with no link to each other or to his main series. The short story collection Zima Blue also consists of stand-alone stories or stories that are linked to one another, but nothing outside the collection. Out of all of these I would strongly recommend Pushing Ice as a solid starting point for its 'Big Dumb Object' SF style and its use of relativistic science, with some excellent characters and a solid story also present. Century Rain, whilst slightly weaker, does showcase Reynolds' interest in out-of-the-box thinking and his interest in noir thrillers. 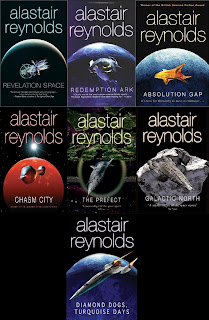 The reading order for Reynolds' Revelation Space universe stories is altogether more complex, with the novels overlapping with the short stories (collected in Galactic North) and the two novellas (collected in Diamond Dogs, Turquoise Days).

This is the chronological order for the short stories, novels and novellas:

Whether this is the best reading order for the books or not is debatable. I think it mostly works, although The Prefect may have more impact if read after the trilogy (Revelation Space, Redemption Ark, Absolution Gap) when the reader is more familiar with the Conjoiner and Ultra factions. Also 'Weather' contains the answer to a major mystery from the trilogy about the Conjoiner lighthugger drives and may benefit from being read later on.

What I would say is that 'Great Wall of Mars' and 'Glacial' should definitely be read before the trilogy, as they introduce characters who otherwise show up out of nowhere in Redemption Ark, and 'Galactic North' (the story) should be read after everything else as it explains the (somewhat puzzling) ending to Absolution Gap and puts something of a full stop on the whole series and story. Chasm City can be read before or after the trilogy, but benefits much more from being read before as some of its characters play a role in Revelation Space.
Posted by Adam Whitehead at 17:02

This is a terrific write-up Adam.

Thanks a million! I picked up "The Prefect" for some light airplane reading and found it quite pleasant. Planning to get the other books in this universe but had no idea where to start. This post makes things very clear!

I have to start on this series, and this is a great guide. Maybe you shoot consider putting it on Wikipedia. If not, would you mind if I did this?

I believe that Wikipedia policy is that blogs are not considered to be verifiable sources for use on Wikipedia articles. Nor has the list been confirmed by anyone officially involved in the series, so I'd say it's probably not a great idea, at least until it's been referred to somewhere else.

Well, wikipedia's policy is to put anything you want on it. If it's wrong, it will get corrected/deleted. I think any extra info on this series is welcome. Some people like to read series in chronological order. I don't mean to refer to this page, but to copy the content. I will include you're approval, if I get t from you...

Great article. This is my favorite scifi series of all times. Thanks for the info.

...where does monkey suit fall in this chronology?..

'Monkey Suit' has appeared since this original blog post was published, and I haven't read it yet. Based on reviews I've found online, it appears to take place shortly after the Melding Plague (so after THE PREFECT but before CHASM CITY, somewhere around the time of DIAMOND DOGS/TURQUOISE DAYS), but don't hold me to that.

...dilation sleep really belongs after the prefect, too, as the former concerns melding plague refugees, but the latter is clearly set before its onset...

...okay, now that i've worked through the entire canon, crossreferencing relative dates between the literature and alastair reynold's own published timeline, i'm fairly confident that this is a well-sorted chronological reading order...

...not coincidentally, it holds up quite nicely toward leveraging foreshadowing as well as character, setting, and plot references for full effect, too...

I ran across Turquoise Days in an anthology - 'twas my introduction to Mr. Reynolds - and was enthralled.

The introduction mentioned Revelation Space, which I immediately found.

Your guide is most welcome, as I'd no clew where to go from RS.

In "the Prefect," the Glitter Band is still intact, and the Melding Plague exists only in the minds linked in Exordium - and of course in the Grub ship - having yet to materially rear its ugly head.

In "Diamond Dogs," it hits the Yellowstone system.

However (pregnant pause) in "Dilation Sleep," the storied characters are fleeing the Plague, yet you place it ere Prefect.

Methinks that thar be bugs in that thar chronology.

Hello!
I'd be interested in starting the series with "Great Wall of Mars", although it seems I can't find a copy on Amazon(.de)
Can somebody please give me a link (preferably to a site delivering to Europe/Germany)?
Thanks in advance!