Several decades in the future. The world has been destroyed in an apocalyptic war and survivors are eking out an existence in the Zone, a nuclear and biogenetically-devastated wasteland in Scandinavia. Dux and Bormin are mutants, genetic freaks with the characteristics of humans combined with ducks and boars respectively. An innocent-enough mission, to gather fresh resources for their town, the Ark, spirals into a more epic quest which will lead them across the Zone in search of a missing ally, opposed by a crazed religious sect. Their mission will have unforeseen consequences for everyone living in the wasteland... 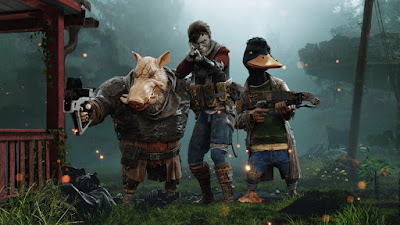 Mutant Year Zero is the latest iteration of the popular Swedish pen-and-paper Mutant and Mutant Chronicles roleplaying games, and Road to Eden and its expansion Seed of Evil are video games based on the pen-and-paper system. The game mixes elements of CRPGs, real-time action and exploration, and turn-based combat akin to the XCOM series. In practice the game comes across as a curious hybrid of Wasteland 2, Fallout, Freedom Force and XCOM and succeeds in unifying disparate influences into a compelling whole.

You start the game with only two characters - Dux and Bormin - but eventually recruit an additional four characters for a party of six, three of whom can be active at any one time. You can swap characters in and out of the party at any time (apart from mid-combat). Each character has a different set of mutations, effectively a series of powerful special abilities which can equalise the odds in combat. Each mutation has a cool down after use, usually requiring another 2-3 kills, before it can be used again, encouraging players to swap characters between battles to keep their abilities fresh. Equipment assignment is also essential..

The game has many of the trappings of an RPG, such as skill points and levels, but it's not really one. Instead your abilities are all focused purely on combat. There are no dialogue choices and the only thing you can do outside of combat and travelling is picking up scrap (the game's currency), weapon parts (used to upgrade weapons) and rare artifacts (used to upgrade all of your character's abilities at once). At any time you can retire to the Ark to upgrade equipment and buy new equipment, although this is surprisingly limited: you can't sell excess weapons or armour that is no longer needed, although you can break it down for weapon parts. Items are also extremely expensive, even at the end of the game, with rare-as-gold medkits being particularly tricky to acquire.

Combat is the game's primary focus and it works extremely well. At first glance the game resembles XCOM with you being able to carry out 2 actions per character turn, such as moving, firing, reloading, using a mutation or throwing a grenade. The emphasis of the game is on stealth. Enemy units will call for backup and shout warnings, whilst particularly large explosions or heavy weapons fire may bring enemies from significant distances away running to help. Limited hit points mean that you can't stay in a stand-up fight for too long, however. The game's stealth mechanic allows you instead engage enemies quietly using "silent" weapons (such as crossbows or pistols with silencers). As long as you kill them in one round, they won't raise the alarm. In some cases enemies have more hit points than the damage you can output in one round, presenting an interesting puzzle to overcome with your mutations. Some mutations allow you to knock enemies unconscious for a round, giving you more time to kill them, but more effective is working out how to trigger critical damage, such as by taking to higher ground or using mutations or equipment which bolster your critical chances.

Once you've worked out how to optimise your ability to kill enemies in one round, the game becomes a compelling puzzle experience as you sneak around enemy flanks, isolate and take down scouts and enemy patrols once they've moved away from the main enemy group, and even use mind-control mutations to set enemies against one another. Some of you characters can even fly for short bursts, allowing them to erupt out of cover and hover above an enemy before unleashing critical damage.

There are multiple enemy types who can be taken down in a variety of ways. Robotic enemies and medbots are easier to handle as they are vulnerable to EMP grenades and electrical weapons, but organic characters can present more of a challenge. Sometimes avoiding a dangerous group of enemies and coming back later at a higher level is the best way of proceeding.

As your characters grow more powerful and get more options for how to handle the enemies, the game grows far more enjoyable. Those first few hours can be a bit tough, though, and some players may check out from the game's somewhat unforgiving difficulty curve before things even out a bit more. 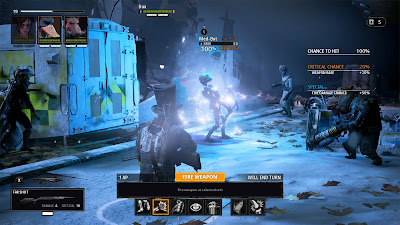 The story is reasonably interesting, although not the most original, but the characters are entertaining (especially Dux, the wise-cracking, death-dealing human/duck hybrid). It'd be nice if they had a bit more dialogue and in-game chatter - the existing barks get old reasonably fast - but they are certainly a memorable bunch. The world feels a little more generic - STALKER mashed with Wasteland - and the lack of dialogue choices means that it can feel a bit threadbare at times. It is beautifully presented, with very nice use of the Unreal Engine to generate rich landscapes. At 25 hours (about 19 hours for the base game, 6 for the expansion) the game is also long enough to be worth the investment without outstaying its welcome.

There are a few issues. Sometimes the game's interface can be a little counter-intuitive and a bit confusing, such as the inability to enter combat mode at will that makes some passive enemies (who won't react until attacked) impossible to kill. This doesn't stop you finishing the game, but it does prevent you 100% eliminating every enemy in the game. The fact you can't heal naturally at any point (say by returning to the Ark) is also a bit bizarre, forcing you to rely on very expensive or rare-to-find medkits in the wild.

Ultimately, though, Mutant Year Zero (****½) is an outstanding game with some of the best combat yet seen in the stealth-XCOM genre. It certainly put the underwhelming previous game in this field - Phantom Doctrine - to shame with a far more compelling central gameplay loop. The game's difficulty curve is "challenging" at the start, to say the least, but if you can overcome that or if you relish a game which refreshingly doesn't hold your hand and pull its punches, it ends up being an addictive experience. The game is available now on Steam, as well on X-Box One and PS4.
Posted by Adam Whitehead at 16:42

Funny thing, i just finished MYZ the other day. Its a great game i especially enjoy the setting. The stealth part is great in the beginning but totally redundant once you acquiere the best weapons and have them fully upgraded. Stealth weapons just dont do enough damage later on and some mutants are just stronger than others, magnus's puppeteer is just plain broken. Besides that i totally agree with your review :-)