How to Talk to Girls at Parties

London in the late 1970s. Punk rock has taken the UK by storm and Enn and his friends are fully immersed in the scene. They attend an arty party in the hope of picking up girls, only to find themselves in the middle of an alien incursion on Earth, and out of their depth. 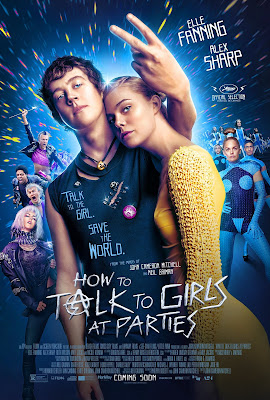 What if aliens invaded Earth in the 1970s but were resisted by a group of punk rockers? This is the amusing premise which drives John Cameron Mitchell's 2018 musical comedy-drama, adapted from Neil Gaiman's very short story of the same name (published in 2006). Gaiman's story is only 18 pages long so the film takes the premise and expands it out over a much longer running time.

The film is centred on two characters, would-be punk musician Enn (Alex Sharp) and alien Zann (Elle Fanning), who finds the aliens' strict culture to be suffocating and runs off to explore human culture via a romance with Enn. The aliens are unimpressed and, led by Wain (Matt Lucas) and Stella (Ruth Wilson), they attempt to reintegrate their wayward child, leading to a fierce showdown between the two factions.

The movie is fun, playing on the bizarre culture of the aliens and the interspecies for romance for laughs, but it is not an outright comedy. It also plays into the idea of doomed teenage romance, parental expectations and the merits of freedom of the individual versus the good of the larger society. In this senses the film does fall into traditional punk cliches - the anarchic freedom of punk versus the stifling conformity of the aliens - but it handles them with enough wit and charm to be enjoyable.

The cast is excellent, including a superb turn by Nicole Kidman as punk mentor Boadicea, and His Dark Materials fans can have some fun by seeing two incarnations of Ms. Coulter (Kidman from the 2007 movie and Ruth Wilson from the current TV show) interact. The young castmembers have clearly done their 1970s homework and nail the period and its attitude quite believably. There's some good musical trivia and at least one stand-out musical number ("Eat Me Alive").

On the negative side, the film feels like it's only superficially covering the themes and it does suffer from occasional tonal whiplash, moving from comedy to romance to darker horror moments in a rather inelegant fashion, and the ending is perhaps a little too neat. But ultimately How to Talk to Girls at Parties (***½) is fun, doesn't outstay its welcome and diverting.
Posted by Adam Whitehead at 13:15

Email ThisBlogThis!Share to TwitterShare to FacebookShare to Pinterest
Labels: how to talk to girls at parties, neil gaiman