In the least surprising news since it was revealed that water is wet, CBS is reportedly working on a Captain Pike TV series as its latest Star Trek project. 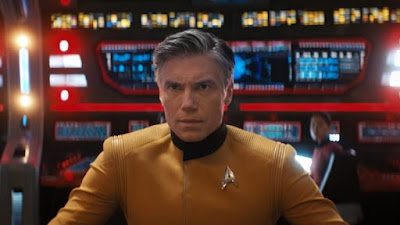 The report is unconfirmed, but is highly probable given the overwhelmingly positive reception to the portrayal of Captain Pike by actor Anson Mount on the second season of Star Trek: Discovery. Fans have asked for a Pike-focused TV series, even signing an online petition, but CBS are apparently still mulling the prospect over.

Widespread criticism of the decision to make Discovery a prequel to the other Star Trek series (despite being clearly far more advanced technically) has led to a soft reboot of the series for its upcoming third season, which sees the USS Discovery catapulted into the 32nd Century. A Captain Pike TV series would reinstate the whole prequel problem this move was designed to overcome. If they decide that issue can be written around, it's likely that they would proceed with at least a limited series featuring Captain Pike's further adventures as commanding officer of the USS Enterprise in the years before James T. Kirk took command.

CBS's preference would be to retain not just Anson Mount as Pike but also Ethan Peck as Spock and Rebecca Romijn Stamos as Number One, but are willing to entertain recasting those roles. They consider Mount as Pike to be non-negotiable at this stage.

More news as we get it.
Posted by Adam Whitehead at 00:17