A coup has taken place on the Romulan homeworld, with the new ruler emerging from the ranks of the Reman underclass, a secondary race treated almost as slaves by the Romulans themselves. This curious chain of events attracts the attention of Captain Jean-Luc Picard, who is dispatched by the Federation to respond to a peace initiative by the Reman leader, Shinzon. However, Shinzon has lured Picard into a trap for his own purposes. 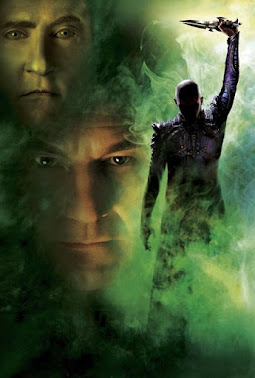 Released in 2002, Nemesis was the tenth feature film in the Star Trek franchise and the fourth to feature the crew from Star Trek: The Next Generation. In some respects it should have been a big hit: it had a new creative team, with hot writer-of-the-moment John Logan penning a script to be directed by the promising Stuart Baird. Paramount hoped to replicate the creative refresh that took place before Star Trek II: The Wrath of Khan, which also tapped franchise newcomers (writer-producer Harve Bennett and director Nicholas Meyer in that case) to reinvigorate the series.
This move proved to be less successful when it comes to Nemesis. The film doesn't quite deserve the near-ludicrous critical kicking it's taken in the almost twenty years since release, though it is still a bitty and poorly-conceived movie that can't quite work out what it wants to be.
At its heart, the film seems to be trying to be a two-handed face-off between Patrick Stewart's Picard and Tom Hardy's Shinzon, who (spoiler alert!) turns out to be a clone of Picard. How the Romulans acquired Picard's DNA is never established. Hardy is, of course, now one of the biggest stars in the world thanks to multiple strong roles in numerous films and TV shows, but he was a virtual unknown when he made Nemesis and is a less confident performer, without the presence and gravitas required to go toe-to-toe with Stewart. However, he is not helped by the script, which even acknowledges that Shinzon taking so much time out from his plans to taunt Picard is ridiculous. His plans also seem somewhat vague, with it being unclear why he wants to attack Earth and how he was able to build such a huge, super-warship so easily.
The film also suffers from stodgy pacing. The film has - at least on paper - a reasonable build-up, with the discovery of the B4 android giving way to the political story with the Romulans, and a climactic, major space battle where the Enterprise-E shows what it can do in a fight. However, the middle of the film feels missing. Character-building scenes (including a subplot expanding on Troi's telepathic assault by Shinzon) were left on the cutting room floor in favour of dull set pieces like Picard running around on Shinzon's ship for no apparent reason. It's also less than clear why the vast and somewhat bigoted Romulan Empire, with a huge military and many worlds under its control, has allowed a human clone to take it over as a ruler.
All of that said, the film has some redeeming features. The early set-piece with Picard and Data getting into hijinks on a speedy buggy is random, but fun. Brent Spiner gives a good performance both as Data and the B4 android, and Patrick Stewart is also, as usual, outstanding. Marina Sirtis has a bit more to do as Counsellor Troi (who has not been well-served by these films so far), although again Gates McFadden might as well have not bothered showing up. There's some humorous exchanges that work well and Hardy, though inexperienced, gives a reasonably a promising performance. An unrecognisable Ron Perlman is also typically menacing as the Reman Viceroy, and it's good to finally see Jonathan Frakes' Commander Riker get his very long-delayed promotion to captain. The visual effects are pretty good and it's refreshing to see the Enterprise-E fighting an cloaked ship with more intelligent tactics (including just blanketing the area with phase fire to see where the cloaked ship is). There's also some great set pieces during the battles, such as the ramming scene.
Although these positive moments are welcome, they can't make up for the stodgy pacing, the floundering middle act and the pointlessness (admittedly more obvious in hindsight) of the B4 storyline. Nemesis had a hard time anyway, going up against The Lord of the Rings: The Two Towers and Harry Potter and the Chamber of Secrets at the box office and with a four-year gap since the previous, underwhelming film in the franchise (not to mention Star Trek franchise fatigue, which was also impacting the Enterprise TV series), but these problems pretty much sank the film franchise until JJ Abrams came to the rescue seven years later.
Star Trek: Nemesis (**½) has some solid character beats and action scenes, but the film feels thematically and structurally unsound, with a villain who doesn't quite work and some really poor pacing. An underwhelming and forgettable entry to the franchise, and a disappointing bow-out for most of the TNG castmembers.
Posted by Adam Whitehead at 18:36

See, it’s really hard to believe you’re reviewing these things from fresh memories when you say things like Troi not being served well by the movies. First Contact fires on all cylinders, including arguably Troi’s best material ever (or at the very least, Marina Sirtis’s).

And I was instantly a fan of Tom Hardy from this performance. I was incredibly happy that his career got the jumpstart years later, because as far as I was concerned, he had already ably demonstrated his wild talent. He’s great as Shinzon. It would be one thing if he weren’t. The fiction of there not being much ado about this film would be vindicated. But honestly, I’ve watched it many times and I don’t think that’s true for a lot of of other fans, and I have to suspect you’re one of them. All your reviews of the films stick very closely to conventional impressions, and Nemesis was quickly dismissed in 2002, and no one has really bothered to reconsider it, even when Hardy himself turned out to be worth something after all.

I rewatched all ten movies specifically for this review project.