AD 2335. The Galactic Terran Alliance (GTA) has been fighting a war against the Vasudan Empire for fourteen years. The war has taken its toll on both sides, but peace initiatives have not gained ground and both sides seem to be locked in a stalemate. Without warning, both sides are attacked by alien vessels belonging to a hitherto unknown species, quickly dubbed the "Shivans." The Shivans employ superior technology and seem to have no interest in gaining strategic or tactical advantages or seizing control of systems, only destroying everything in their path. With the Shivan fleet pressing in on the Vasudan homeworld and Earth, the humans and Vasudans reluctantly join forces to face the mutual threat.

The space combat video game genre enjoyed its heyday in the 1990s. Inspired by the original space simulator game, Elite (1984) and spearheaded by Wing Commander (1990), numerous games in the genre were released over the next decade. Arguably the best-received in terms of acclaim and sales was Star Wars: TIE Fighter (1994). A late challenger was Conflict Freespace: The Great War (Descent Freespace in the United States for various copyright reasons), released in 1998 by Volition, who, as Parallax, had created the Descent series of combat games.

Freespace chose an inauspicious moment to enter the genre, as its popularity had arguably just peaked and the developers had no experience in the field, but it proved a good move. At the time the game came out, many of its rivals (such as the X-wing series) had seemingly abandoned single-player narratives in favour of chasing a multiplayer audience, whilst the Wing Commander series has grown obsessed with elaborate cut scenes and full motion video starring Hollywood stars over actual gameplay. Freespace struck a chord with its visceral action, impressive game engine, fine sense of pacing and stripped-back presentation. Freespace has no lengthy animated sequences or cheesy videos packed with military cliches, instead presenting its story simply and matter-of-factly, and insisting on getting players into the action as soon as possible.

The game consists of 29 missions, each of which starts with a briefing. After the briefing your ship and weapons loadout are auto-selected, allowing you to join the action immediately. Veteran players can choose their craft and weapons to better suit their play style. During the game you can command fast, versatile (but fragile) scouts, hardier bombers and jack-of-all-trades fighters. The game is notable both for its unusually finely-tuned difficulty setting (with five rather than three settings, including a "very easy" mode that effectively allows you to sit back and just watch things unfold as your wingmen do everything for you) and for its unusually strong AI, particularly that of your wingmen whom you can give very specific orders to (such as automatically fending off enemies targeting your fighter or targeting specific subsystems on an enemy capital ship). Part of the game's enduring appeal is this more strategic element, sometimes allowing you to stand off and observe a battle from afar and order your fighters on how to proceed. 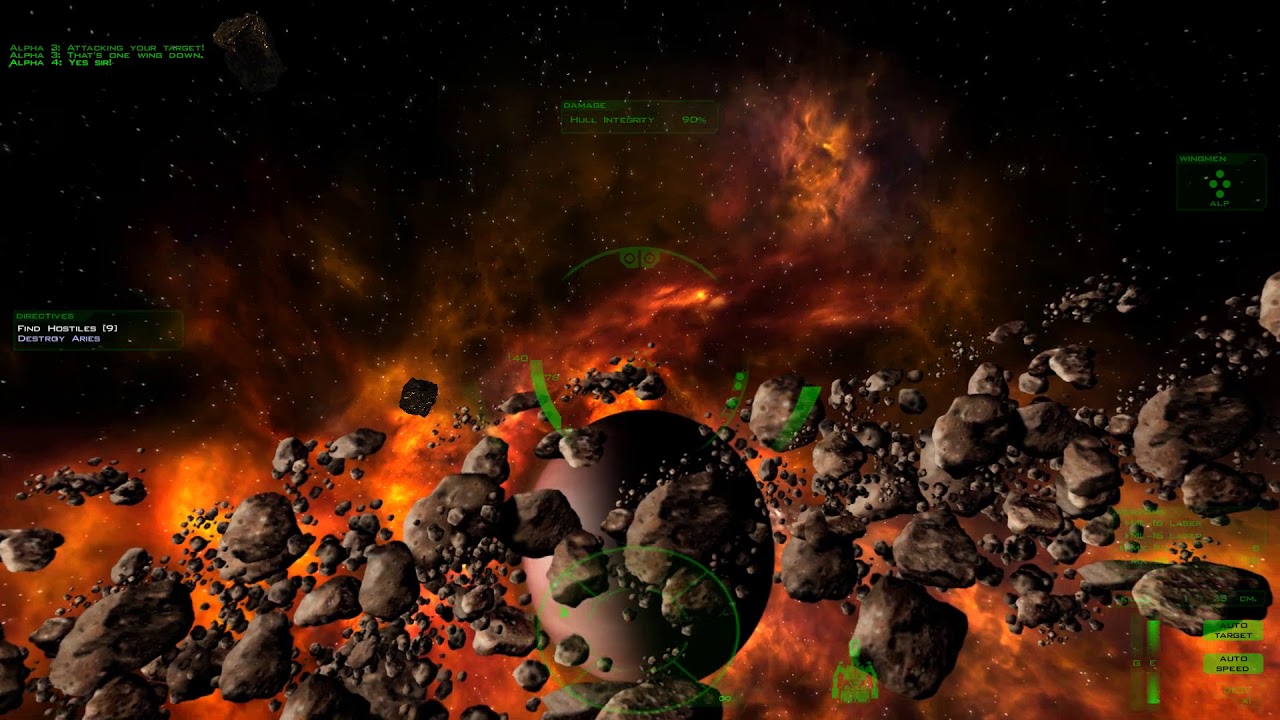 Much more fun, of course, is the up-close and personal dogfighting. Freespace has a robust flight model and, with modern versions of the game, excellently updated graphics which makes close-in space combat often joyous to behold. Matching speeds with enemies, executing an afterburner burn to break a missile lock and dropping velocity to keep an enemy in your sights is all well-handled and instinctive. It was great in 1998 and remains great in 2020.

The story unfolds over a lengthy campaign. The story isn't the most dynamic ever in the genre, but does a good job of keeping you engaged throughout. There's a nice XCOM-ish feel to early missions as the Terrans and Vasudans have to scavenge Shivan technology to match their superior shields and sensors, and later on the battles becoming increasingly large and desperate. It's not the most compelling SF narrative ever written, but does it job very well. Particularly interesting is the lack of exposition with regard to the Shivans, who remain a terrifying enigma right up to the end.

The original game is great, although it does have some technical drawbacks, particularly the lack of fully-voiced dialogue; more than once important plot information unfolds through on-screen text dialogue, which is easy to completely miss mid-battle.

After completing the main campaign, you can proceed on with the game's expansion, The Silent Thread. The modern version of the expansion includes 18 missions (all voiced this time), generally somewhat harder than in the original game, and with a much murkier and more original storyline. I must admit to enjoying this more than the original game, as it moves away from standard SF cliches a bit more.

Conflict: Freespace (****) and The Silent Threat (****½) are both joys to play in 2020, having, thanks to the dedicated and active modding community, aged and matured like a fine wine (see below). Even more importantly, they set the scene for Freespace 2, one of the best video games ever made.

Playing the Game: Playing games that are 22 years old can be a bit of an uphill experience, especially for a franchise that's never had an official remaster. Fortunately, that's not much of a problem; back in 2002 Volition released the source code for all three games in the series and that's allowed a very passionate modding community to continuously update them with new graphics, sound effects and voiceovers. The easiest way to play them is to get a copy of Freespace 2 from GoG, download and install the Knossos launcher, and, once that's done and found your copy of the installed game, you can then select which mods to use. The ones you really want to install are Freespace Port (which adds the original campaign), Freespace Port MedivaVPs (which updates all the graphics and sounds), Silent Threat: Reborn (which adds the latest version of the expansion campaign) and MediaVPs (which updates the Freespace 2 campaign with all the latest material). Then you're good to go.

As a bonus, there are also dozens of fan-made mods for the game, including ones for well-known franchises like Babylon 5 and Battlestar Galactica, as well as a fan-made new game in the Wing Commander franchise. There are also numerous mods which expand on the Freespace and Freespace 2 storyline.
Posted by Adam Whitehead at 15:11