Netflix has renewed its animated fantasy series The Dragon Prince for four more seasons, taking the show to a total of seven. 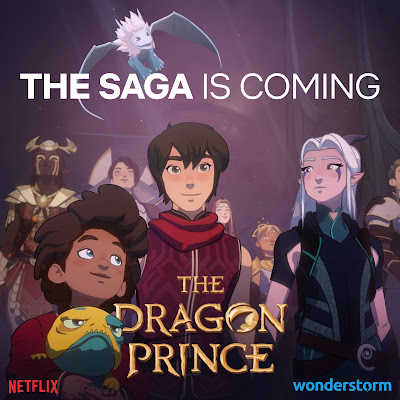 The series was always planned to be a seven-season project divided into three arcs, the first spanning the first three seasons and the latter two spanning two seasons each. With the first sequence complete and relatively working well as a stand-alone, and with Netflix infamously keen on cancelling shows after two or three seasons, fans had feared that the full story would not be told. These fears were increased by reports of a hostile working environment on the project last year by two ex-employees (claims that were contradicted by other employees), leading to fears of cancellation.

That is now clearly not the case and The Dragon Prince will return for a fourth season, subtitled "Earth" (after "Moon," "Sky" and "Sun"), as well as three more after that point. Season 4's release date is unknown.

The Dragon Prince universe is expanding, with an art book due for release next month and a tabletop roleplaying game called Tales of Xadia planned for release in 2021.
Posted by Adam Whitehead at 15:00

Awesome, I don't need to worry about the show getting 'renewed' between seasons anymore. They'll be able to finish it their way.